Analyst company Canalys published its report on the Chinese smartphone market in Q3. According to the data, Huawei, Oppo, and vivo are in the lead with 19%, 18% and 17% of all shipments, respectively. The overall shipments declined 5% to 119 million units.

The big gainer is Apple, which saw its numbers grow 40%. This is the first growth for the company since the iPhone 6S, launched eight quarters ago. 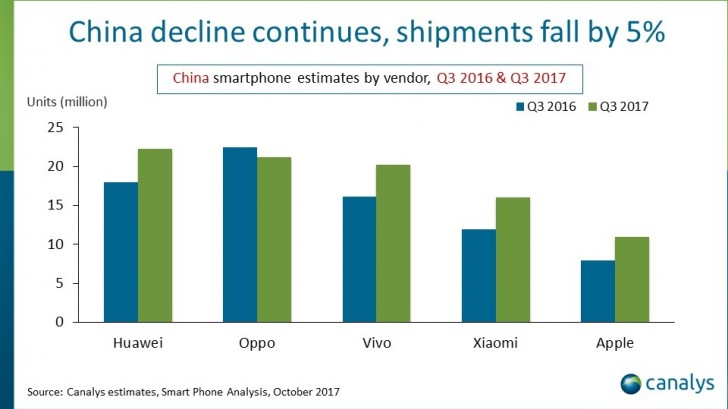 Back in June-September 2016, Apple shipped 8 million iPhones. 12 months later the company registered 11 million units. The response to the new iPhone 8 and the iPhone 8 Plus has been positive, and the Chinese audience is hyped for the iPhone X.

“Despite being touted as widely expensive, excitement for the launch of the iPhone X is building in China”, says Canalys Research Analyst Mo Jia. 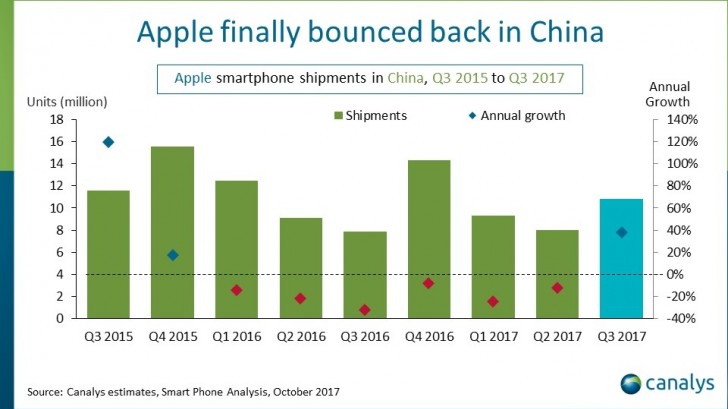 Despite the Top 5 strengthening their positions, the decline in shipments is worrying all manufacturers. In Q4 they are hoping to boost sales with the November 11 online shopping festival. Canalys estimates that Xiaomi is going to break the dominance of the Huawei-Oppo-Vivo trio due to its aggressive expansion.

You mean Global i guess

Pack of lies from start to finish, they own the media. 150m $ ebook price rigging scandle, plus tax irregularities in the billions, will you believe anything they pass the press to print. They are desperate, look at the story above, where they have p...

No one can beat Huawei. Samsung will fall from No 1 in 2 years max...