Canalys reports that Samsung and Xiaomi each shipped a record 9.9 million smartphones in India during the second quarter of this year. The total number of phones shipped in the country was just under 33 million.

Samsung has bounced back and is only a hair behind Xiaomi in terms of shipments, after losing its lead in the previous two quarters. The company’s share grew almost 50% quarter to quarter, those are the best gains it has seen since the end of 2015. 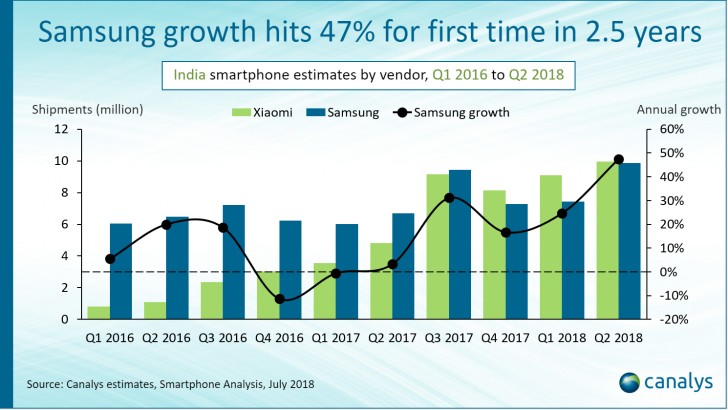 The best-selling phone in Q2 was the Xiaomi Redmi 5A with 3.3 million units shipped, giving it a healthy margin over Samsung’s best seller – the Galaxy J2 Pro (2018) with 2.3 million. The analysts believe that Samsung’s technology and supply chain prowess give it an edge over Xiaomi.

Together Xiaomi and Samsung make up 60% of the market in India, followed by vivo in third (3.6 million units) and Oppo in fourth (3.1 million). Oppo is challenging Xiaomi with its new Realme sub-brand, but the company is lagging behind vivo’s growth. 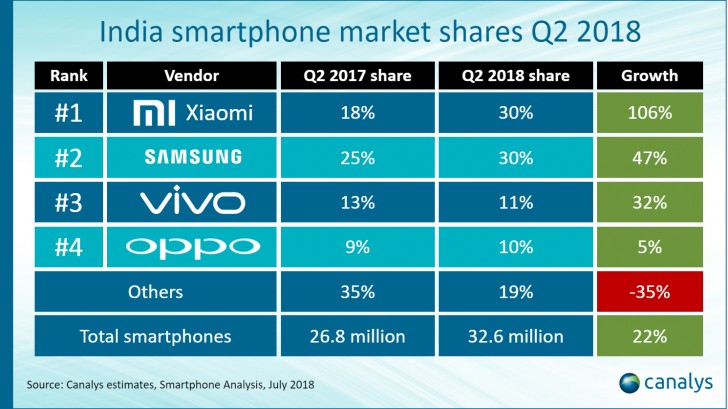 Apple is not doing so hot – iPhone shipments fell 50% during the quarter. Its strategy is quality over quantity, which will help it maintain profitable margins. Asus is changing up its strategy by going exclusive with Flipkart, which helped it triple its shipments.

Not really they may offer price to performance , But they do cut down on quality , camera and software , You can't have it all.