Two days ago we reported that Oppo was the market leader in shipments on the Chinese market, but today’s detailed statistics from Canalys bring worrisome details. According to the analysts, smartphone shipments suffered a hard decline of 21% in Q1 2018 on a yearly basis. This is the worst drop Chinese market faced since the beginning of 2012. 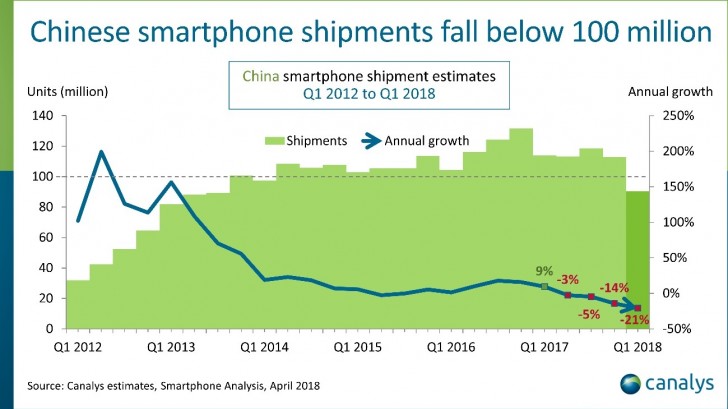 Top four vendors are all domestic companies - Huawei (along with Honor), Oppo, vivo, and Xiaomi. While Huawei saw modest 2% growth in shipments to 21 million units, Oppo and vivo saw a 10% decline with respectively 18 million and 15 million shipped units. Xiaomi is the only exception to the overall picture due to its ultra-affordable phones with a 37% jump to almost 12 million units.

Mo Jia, Canalys Research Analyst, said that because of marketing and channel management costs for a country as big as China, only vendors that have reached a certain size could cope. This leads to a consolidation of the market - the same time last year companies outside the top four accounted for 48 million shipments or 42%, while in Q1 2018 their share was half that. 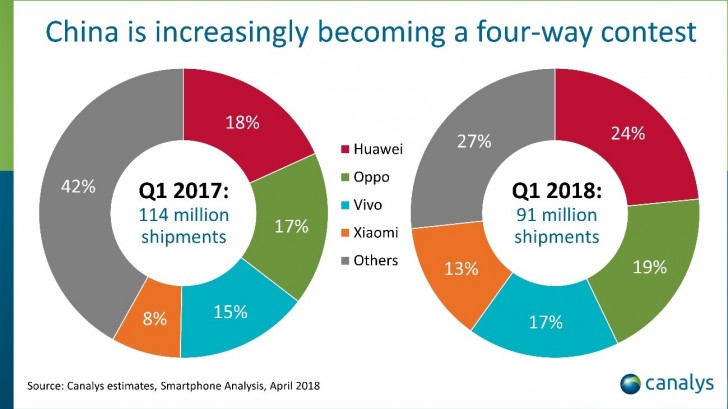 Although the market is declining in the last two quarters, it should not be seen as a free fall. Oppo released the R15 and the R15 Pro, Huawei launched its P20 series and Xiaomi is about to announce the Mi 7. Those should help the Chinese market return to growth in Q2, but not by a considerable margin.

Jia added that companies are cautious with oversupplying the market and are refocusing on research and development to introduce more fascinating technologies in the near future that will restore consumer interest.

CIRP: iPhone 8 and iPhone 8 Plus sold better than iPhone X in Q1

Kirin or Exynos, may be not such good as SD but it's nice to know that there are alternatives, pretty close to the No1. Huawei is not the only Chinese that is making decent smartphones. And there is nothing to clone. We are in 2018, smartphones...

I know a lot of non-Chinese companies outsource their manufacturing to China to save money what I meant was that I won't ever buy a phone made specifically by a Chinese company again, period. Huawei makes some decent looking/original phones and not i...

Well I am from Europe too and i can confirm that many people have Chinese phones and they know it... First of all Huawei is second best seller in Germany... Actually ppl know that Huawei is Chinese and they don't care because of the build quality... ...