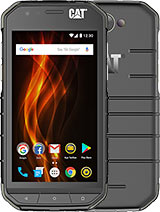 Iv been using this phone for a few weeks now. Its slow but not too slow. Camera is ok enough. 200 grams is not heavy compared to huge phones nowadays that always need a cover (30 grams or more), this one sure doesnt. MP3 player is good, volume can be very loud. And its so strong, i just drop it in my bag. Battery is awesome. And charging is much faster than i expected. It has android 8 by the way.

My first CAT S31 got replaced due to overheating. The replacement S31 was never OK, screen blacked out on making calls, rebooting continuously, not water proof even on gentle rain. Not worth the money.

High_Kai, 13 Jul 2019its a nice phone but mine got water damaged a day ago.. the... moreI dunked mine in the hottub a couple times. No problem. All the flaps need to be totally sealed tho.

This Phone is useless, very slow and somewhat short on memory
NOT IMPRESSED

I bought this some months ago, my all apps are running well and since I live in Lapland and go around outdoors often it's good to have a phone like this that can take hits, moist, and can be in cold temperatures without breaking and can be used with gloves on. I've worked with this well.
The preset messaging app wasn't very good but I downloaded Google's messages app for Android on it's place and it just works well, I have nothing bad to say about the phone... CAT is doing well in finalizing a product like this but I'm not sure about the ethics on this one about the backround of the company but I also think that the whole world and it's business has a lot to work on on sustainable development and handling truth and love.

Experiencing hell with WhatsApp. Not able to download pictures even after watching one billion diys on YouTube. It's a no.

Wooon, 06 Mar 2020The phone is very slow even on basic tasks and without apps... moreIt is not right

The phone is very slow even on basic tasks and without apps running.
The signal is weak, as the S31 struggles to make phone calls where other phones do just fine.
The quality of the camera is dreadful.

Is the cat S31 water resistant

its a nice phone but mine got water damaged a day ago.. the screen did turn on but was soo dark that you couldn't see anything on it.. did fix it by opening the phone and drying it all.. the screen does look like it got water splashes all over it but the water is actually inside the phone not on top of the screen... I did expect it to be waterproof as they said.

It crash and crash... if use in car - bluethooth for handsfree and GPS+4G for Waze (G-maps) - the max time without restart is 30 minutes. After last update it does self re-start even changing some settings in phone. If you just dial and make medium level photos it's almost great phone, if use internet or GPS then choose Apple or Samsung.

Shit hw. When will be S32 with normal specs in hw?

Can someone tell me, it has better or has just shitty cell network connection like s30.

I have s30 for two years and only thing that annoys and had let me down is network connection.

I hope it less bugged then S30.

Good for ever worker working on constructions.
Or for outdoor trekers.