Last week the world celebrated the 60th anniversary of the first manned spaceflight, performed by Yuri Gagarin on April 12 1961. Caviar is marking the occasion with the launch of its “Space Conquerors” line of customized iPhone 12 Pro and 12 Pro Max phones. These not only celebrate the past but also look to the future as well with nods to Elon Musk’s SpaceX (and his ambition to go to Mars) and Jeff Bezos’ Blue Origin.

The iPhone 12 Pro (Max) Gagarin is made out of aviation-grade titanium and has a 3D miniature of the Vostok-K rocket that brought the cosmonaut to orbit. Only 12 units will be made in this design, each of them containing pieces of Gagarin’s historic mission.

For starters, there’s a Navigator’s watch (engraved with the April 12th date), identical to the one Gagarin used to track his 108 minutes in space. There is even a genuine piece of his Vostok-1 capsule. The Gagarin model starts at $8,920.

Caviar also made the Armstrong model, which celebrates Apollo 11’s landing on the moon and the man who first set foot on it, Neil Armstrong. A depiction of an astronaut planting the American flag on the moon is engraved into the titanium back below the date of the landing, July 20 1969.

Another model celebrates Sergei Korolev, the father of practical astronautics, who was involved with the development of Sputnik, the launch of Laika the dog and then Gagarin himself. The case is made out of hardened titanium, double electroplated with 999 gold, engraved on the side is October 4 1957 – the day that Sputnik launched, the first ever artificial satellite. 99 units will be made, starting at $6,760.

Then Caviar focused on the present and future. The custom iPhone 12 Pro (Max) Musk depicts SpaceX’s ultimate target, Mars, and features Elon Musk’s silhouette. Only 19 units will be made, one for each year since SpaceX’s founding, starting at $6,610. The titanium back is adorned by pieces of the CRS-14 Falcon 9 rocket and CRS-17 Dragon spacecraft, which brought supplies to the International Space Station.

A Musk superfan commissioned this next model called Musk be on Mars. It depicts the SpaceX Dragon, and actually contains a piece of the spacecraft in question.

Custom design by a fan: iPhone 12 Pro Musk be on Mars

Then there’s the Bezos model, named after the founder of Blue Origin, another private company developing rockets. The back (made out of hardened titanium) depicts a feather – the logo of the company – and is engraved with the date April 29 2015, which is when the New Shepard reusable rocket flew for the first time. You can pick up an iPhone 12 Pro Bezos for $5,840.

Next up is a custom watch, the Discovery Meteorite, named so because it contains a piece of the Tsarev meteorite that was discovered in 1968. The 42 mm stainless steel case (12 mm thick) contains a CVR ELT3350A Tourbillon movement (19 stones). The mechanism is wound manually and has a 38 hour power reserve. The front is protected by sapphire glass, the 22 mm bands are made out of blue alligator leather. 99 pieces will be sold at $4,450. 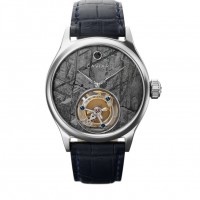 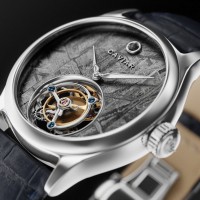 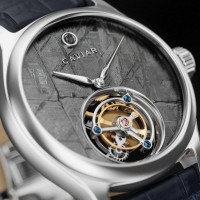 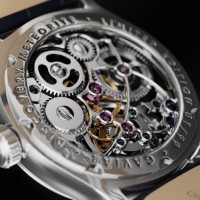 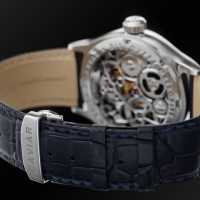 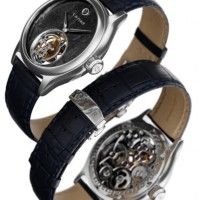 If shoes are more your thing, you can pick up a pair of Musk or Bezos sneakers for $990. The Musk superfan also commissioned a custom pair to go with the Musk be on Mars phone. The Space Odyssey Mars sneakers will set you back $1,980.

For more, check out the official page of the Caviar Spake Conquerors collection.

That Gagarin one (and might be some others) seems uncomfortable to hold and pocket.

Why are they making phones based on them? Then again Caviar's target audience is likely people who would waste their money of silly things like these as opposed to helping people! Also, who was the silly dude that said space wasn't rea...

What an obvious globalist propaganda, since nobody believes in the fake Moon landings and Space crap, any more! Who is going to buy these very expensive and very crappy iPhones, anyway?