Apple has long been rumored to introduce three new iPhones this year, at an event that might take place during the week of September 9. A 5.8" direct successor to the iPhone X (with a new chipset and camera system), a 6.5" larger / "Plus" version of that, and a 6.1" model that will be the cheapest of the bunch.

Its lower price will be achieved by using an LCD screen instead of AMOLED, and an aluminum frame instead of stainless steel. Speaking of which, the color of the chassis may not entirely match that of the glass back.

All three iPhones will have wireless charging, along with Face ID and the display notch needed to house it. They will be very similar in looks, but the 6.1" budget version will only have a single rear camera. All will use the gesture system introduced last year for the iPhone X. 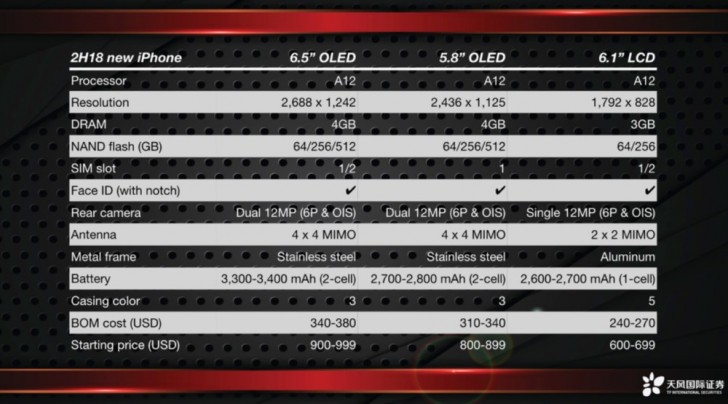 Well known Apple analyst Ming-Chi Kuo has shared the table above, detailing the three handsets' specs and the differences between them. The 6.5" model might launch at $999, which means the successor to the iPhone X will probably be $100 cheaper than that was when it got outed last year.

The 6.1" LCD iPhone may only become available in October, because of issues with its production schedule. The other two devices should be out in late September. The 6.1" and 6.5" iPhones will both get dual-SIM capable variants in some markets.

Kuo says iPhones will not have support for the Apple Pencil stylus this year, contrary to past rumors. His reasoning is that it simply wouldn't be a good experience to use it. On the other hand, split screen multitasking may be a go for the biggest model.

Alongside the new iPhones, expect Apple's event next month to also unveil updated AirPods, the AirPower wireless charger, a new Apple Watch, and a new generation of iPad Pro tablets. The Apple Watch will have a bigger display in the same overall size, while the iPads will have 11" and 12.9" screens, with slimmer bezels. They'll get rid of the Home button and fingerprint sensor and instead ship with Face ID for unlocking.

Really?? WOW your the one who is giving baseless speech. There are a lot LCD phones that have notch there bezels are so thin so please check up your facts and talk well :)

LCD with thinner bezels than they've ever designed, with a smaller and tighter bottom connection than they've ever used, and with a notch they've never had to light-seal before. But let's not let any of that get in the way of baseless accusations.

The iPhone 4 releasing time I was unaware of it because I started to follow the technology with reviews and everything else at 2013 so I don't know if that was genuine or not. The iPhone X was genuine because the phone was with the newest design a...