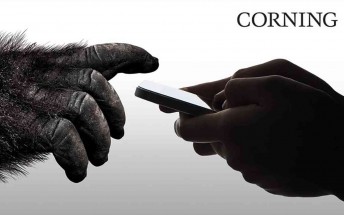 Today, Corning has announced a new version of Gorilla Glass, the sixth version, to be precise. Cornings scientists were able to engineer an entirely new material that would better survive multiple drops. Tests show that Gorilla Glass 6 survived fifteen drops from 1 meter before actually breaking. This is apparently twice as many drops that Gorilla Glass 5 can withstand.

Gorilla Glass 6 is an entirely new glass composition that can be chemically strengthened to give it significantly higher levels of compression than is possible with Gorilla Glass 5. This enables Gorilla Glass 6 to be more resistant to damage, - John Bayne, Vice President, Corning Gorilla Glass

The way its done is the new glass has a chemical composition thats different from Gorilla Glass 5s. This new composition makes it easier to chemically increase levels of compression which, thus, enabled Gorilla Glass 6 to be more resistant to damage.

According to Corning, people drop their phones an average of 7 times a year with more than 50% of drops occurring within a meter height. Corning has put its glass into over 6 billion devices manufactured by more than 45 major brands. Check out the full press release at the Source link.

Corning Gorilla Glass 5 will survive drops up to selfie-height

The original was by far the best. Every new generation of GG is just a bigger piece of scratch-prone crap.

Lol. So.. you are waiting for King Samsung next innovation? Too bad.. sony will follow it 10 years later (if they can survive for atleast 10 years, but i highly doubt it)