Phones have been getting heavier. And no, it’s not because they’ve been getting “bigger” - screen size certainly went up, but thickness went down. The average volume of the 50 most popular phones has been pretty stable since around 2006. If you remember your physics lessons from school, you’ll know this means that density went up.

We think that the increased use of metal and glass caused this. Both are heavier than the plastic that was used in the early days. It’s not just that they are heavier, they need to be thick too. 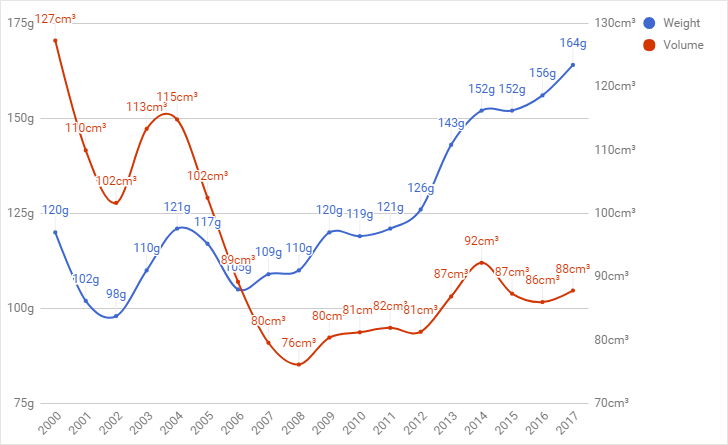 Plastic (as the name suggests) bends easily but quickly returns back to its original shape. Metal bends permanently, especially around weak spots where the keys and ports go. So metal needs to be thick to keep it from bending.

Around 2014 and 2015 we had a string of “bendgate” victims – including high-profile phones like the iPhone 6 Plus and Galaxy S6. The larger the screen, the easier to bend – it works like a lever (again with the physics).

And screens have been getting larger. Plus, the recent trend of 18:9 (and wider) makes phones even longer. We’re not saying this is the only reason phones are getting heavier, but it’s a major factor.

Bending iPhone 6? But the controversy is, Bendgate that I remember that.

According my deduce, if the people heights is 185cm the phone weight should be below 185g... to have the golden balance weight to holding the Phone. Yet anything have vary from person to person and it is also depends on the material of used and the s...

its a excellent phone