Display aspect ratios are a hot topic this year as the hegemony of 16:9 is coming to an end – high end and some mid-range phones are switching to 18:9 or even wider en masse. But we have to remember that 16:9 did not always rule.

We plotted the aspect ratios of handsets in our database – both smartphones and featurephones. Note that this is based on the phones released each year, regardless of their popularity or sales. Not that it’s hard to see which phones sold well and which didn’t.

We can see three major eras. The 16:9 era (which is now coming to an end) started exploding in the 2012-2013 period. From then it quickly expanded to be the aspect ratio of choice for just about every phone.

But in the beginning, 5:4 and 4:3 ruled the land. Back in those days this meant 176 x 220px or 120 x 160px – remember that we’re talking about the ratio, not the pixel count. The former was popular among feature and smartphones alike, the latter was usually found on featurephones. 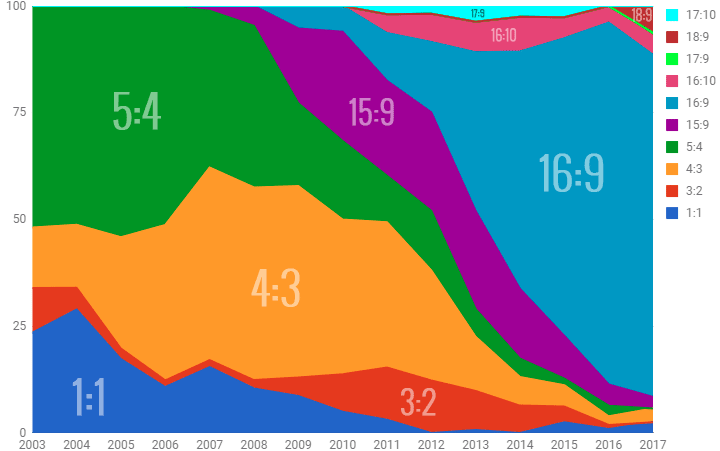 Then 4:3 screens picked up. The ratio was the popular among computers at the time (adopted from the TV industry). It is still common today as most consumer cameras shoot 4:3 photos, web pages still (but especially then) were designed with this proportion in mind and so on. 4:3 is also great for text, much like 16:9 is great for multimedia.

You can see a new era starting – tucked in the upper right corner are the 18:9 phones, quickly gaining popularity. And judging by the leaks and rumors we’ve been seeing, the new wider screen format will only get more common.

Agreed, 18:9 is bit too much for phone or devices which are not much of immersive. Even 16:9 without logo and bezels would look good.

you read it wrong my dear, he said *if these phones where made with no logos in front* with no fancy silver bottom bezel, just plain flat black glass the will 100% look better than todays phones. and yes, i agree with him, if there's no logo and...