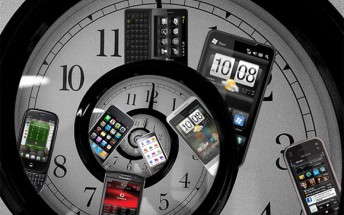 A few weeks ago we looked at the history of iOS, now let's remember the OS that are no longer with us. Some of them powered smartphones before someone even coined the term, but they proved evolutionary dead ends.

Many will remember Symbian as their first smartphone experience. The OS launched on mobile in 2000 with the Ericsson R380 and the Nokia 9210 Communicator. It saw many versions  Series 60, 80, 90, also UIQ. Most didnt live long, Series 60 coming out as the sole survivor.

It turned into Symbian^1, Symbian Anna and finally Belle. The last few Symbian-running Nokias got updated to Belle (by that time Nokia was the only maker still using the OS) and the Nokia 808 PureView proved to be the last Symbian phone ever.

Like Symbian, Windows Mobile hit the mobile scene in 2000. Back then it was PocketPC 200 and powered PDAs and phones, the term "smartphone" hadnt caught on yet. It transformed into Windows Mobile and HTC and others helped transform its UI into something better than a desktop UI running on a stylus-centered touchscreen.

Microsoft saw the end coming and launched Windows Mobile 6.5 as a stopgap measure while Windows Phone 7 was being finished. The last WM6-powered phone seems to be the Sony Ericsson Aspen launched in 2010.

In 2010 Microsoft was finally ready with its next-generation mobile OS, dubbed Windows Phone 7 (no more "Mobile"). Unfortunately, while the software was done the hardware wasnt. Nokia would eventually kick things off with the Lumia 800 in 2011.

After several updates, this branch of Windows reached version 7.8 and that was the end of the line for it. Much like Windows Mobile 6, WP7 phones could not be updated to version 8.

In 2002 Sharp and Danger introduced the Hiptop  a smartphone with a QWERTY keyboard sold by T-Mobile as the Sidekick. With solid messaging features it became fairly popular for a while, surprisingly lasting until 2010 when hardware keyboards were old news.

Microsoft bought Danger and continued its partnership with Sharp to produce the Kin. It switched the carrier to Verizon but kept the hardware QWERTY. The Kin were a sort of limited smartphone  not quite on par with iOS, Android and even Windows Phone 7.

The touchscreen-only Kin TWOm was discontinued in 2011 as it became clear the Kins werent gaining traction and Microsoft's new darling, WP7, was ready to go. One thing has to be said though  KIN OS inherited the UI style of Zune, which was the groundwork on which Metro UI was based.

Also, by that time Danger founder by the name of Andy Rubin had moved on to another company that produced a little OS known as Android.

Most of those are mere newcomers to the smartphone game. Palm OS has been going since 96 and like Windows Mobile it began life as a PDA OS, eventually growing phone functionality.

Palm phones were quite well known for their hardware QWERTY keyboards and that lasted until 2008 with the release of the Palm Centro.

Palm wasnt ready to give up on keyboards, but it gave up on Palm OS. It created Web OS  one of the most influential touch OSes, that barely managed to survive a year in the smartphone market. Launched with Palm Pre and put out to pasture with the Pre 2.

It's still ticking as a TV OS in some LG models and its UI legacy continues in Android and iOS.

BlackBerry started off with a pager in 1999, moving on to phones like many of the other OSes on this list. There was collaboration between Palm and BlackBerry for a while, but the BlackBerry OS like Palm OS was aging quickly in the eyes of iPhone users.

Eventually the classic OS was killed off in favor of BlackBerry 10 in 2013. Despite the similarity in the name it was a completely new operating system, based on QNX which the company had acquired earlier. BB10 is still on the market though it's once dominant position is just a distant dream.

It's a slaughterhouse over here. Maemo was Nokia's backup OS, Linux-based and powerful it powered the company's proto-phablet, the Nokia N810, in 2008. That was version 4, version 5 was at the heart of the N900 in 2009.

Thats as far as it went, a successor OS called MeeGo launched in 2011 with the Nokia N9. The N9 proved to be a one-off, but it set the design language for the company's upcoming Lumia devices a few months before the Lumia 800 launched.

Nokia dissolved its partnership with Intel on the project and Samsung picked up the reins with Bada. Heavily reworked but still Linux-based the OS debuted with the first Samsung Wave in 2010. A few generations of phones came out, but the platform was officially killed off in favor of Tizen in 2013 (though the last Bada phone came out in 2012).

The OnePlus and McLaren partnership is officially over

HUGE fan of the entire Viewty line. The Viewty, Renoir, Arena, Viewty Smart, and Viewty Snap rocked. I still have all of them working properly. The S-Class on Arena, V-Snap and V-Smart is smooth and the phone seems balanced. Doesn't freeze or lag. LG...

Haha thats funny. My friends here in the US used the LG Chocolate and I had the LG Arena.. for whatever reason the Arena ran "smooth" compared to the Chocolate. The Arena's browser was slow and clunky would freeze and collapse the phone som...

I had an LG Viewty Smart running S-Class and loved it! Glad I'm not the only one :)