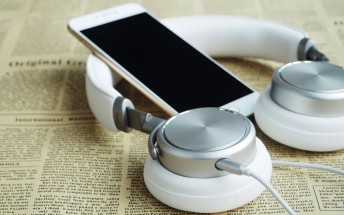 The Siemens SL45 from 2001 was the first phone to have a card slot for storage and also the first to feature an MP3 player. It came with a 32MB (megabyte) MMC card and a pair of stereo headphones.

Unfortunately, those used a proprietary COM port to connect to the phone (as did many phones later on). The familiar 3.5mm audio jack didn’t arrive on the scene until 2005 and it wasn’t alone.

We picked the Top 50 phones (by user interest) for each year and counted the number of audio connectors. Between 2007 and 2009 there was a brief challenge by the smaller 2.5mm jack, but that fizzled out quickly.

By 2009, the 3.5mm jack had established itself as the clear winner for hooking up wired headsets. And from 2010 to 2015 all popular phones had the jack on board.

It was such smooth sailing, what happened? Apple started rocking the boat, that’s what. Of the top phones of 2016 exactly two lacked the old school analog jack – the iPhone 7 and 7 Plus. This year only 39 of the Top 50 use the formerly ubiquitous jack.

We also plotted the rise of USB-C/Lightning ports. As they say “correlation does not imply causation” but look at that chart. And with Apple leading the way, manufacturers had plenty of excuses to drop the 3.5mm connector and reroute the headphones to the USB port.

It’s a pretty steep drop in popularity as you can see. At this rate, the 3.5mm jack will be gone as quickly as it came to dominate the scene.

Of course, there’s one thing not included in this chart – the number of people using wireless headphones. Bluetooth has had several additions to enhance its initially poor audio quality and there’s a rich and varied market for Bluetooth headphones.

Will wired headphones – be they 3.5mm or USB – go extinct entirely? Certainly not, at least not until phones switch over exclusively to wireless charging. Which may never happen.

As for our hero, the 3.5mm jack, things are not looking good. Between USB-C headphones and Bluetooth ones, its days may be coming to an end, which is sad news for those wanting to listen to music while topping up their battery.

That's exactly what they do it for "money" did anyone really think they do this for giving the consumer's a better product? Really? Lol.

Man i hate apple from apple 6 i had. Its just stupid expensive phone which do nothing extra apart its cost a lot. Same phone for 1/3 of its price can do the same things. And nowdays less and less phones have jack for headphones.

Removal of 3.5 is just bad move, since you cant: 1)Charge phone and listen to music. 2)Use your 3.5 hp anymore But you have to: 1)Spend more money on a bt headphones(they dont last more than 1 year usually, you will have to buy another pair)...