Counterclockwise: tracking the shrinking bezels of phones over the years 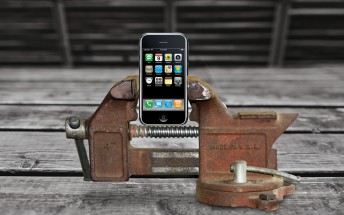 Everyone loves large screens. Were less passionate about large phones, though. Its bezels that make all of the difference, so were happy to see manufacturers put smartphones on a bezel-burning diet. This is a relatively new trend, enabled by improved touchscreen technology.

Lets start at the dawn of the modern smartphone, 2007 and the launch of the Apple iPhone. Back then the average screen to body ratio was 33%, clearly the market was dominated by non-touch devices with keypads or keyboards. The iPhone rose way above that with a 52% Screen-to-Body (StB) ratio.

Average screen to body ratio over the years

The iPhone teleported to the front and froze there - stuck on 3.5 until 2012s iPhone 5. This left the crown within HTCs grasp and the Taiwanese maker went into a four-year hegemony.

It started with the Touch HDs 3.8 screen and 56.9% StB ratio. Its successor, the fabled HTC HD2, went up to a massive 4.3 screen, while growing only slightly in size. These two phones had a screen to body ratio thats 63% and 52% better than the average smartphone respectively.

Yes, even the Xiaomi Mi Mix was only 23% better than the average - its impressive 83.6% screen to body ratio compared to the 68% average.

The best screen to body ratio of the year didnt always rise - e.g. the Rezound (60.3%) had chunkier bezels than the HD2 (65.2%). However, the average number always ticked up. Sometimes by a little, sometimes it jumped more noticeably.

Gains are harder now, as we get closer and closer to 100% StB ratio, even a tiny bezel can ruin the score. And some bezel left over is required to help with the handling. Androids UI isnt ready for the palm of your hand to touch pixels - although ZTE certainly tried that with the nubia line.

The next innovation could come from that direction - squeeze gesture control. ZTE tried it and recently HTC did too with the U11. Apples unique control over both hardware and user interface could see it leapfrog the Android competition. But Apple has been surprisingly bad about keeping bezels slim, despite the explosive introduction of the iPhone.

Sharp's squeeze phones are not exactly squeeze phones, they have a "grip sensor" that is mainly used to detect when it's held in hand, such as pick-up to wake.

Bezels are just more dangerous if they're covered in glass, what with this nonsensical 2.5D glass trend. The Galaxy S3 broke so easily because the bottom end curved downwards and covered a frequent point of impact in the same piece of glass that cove...

Bezel-less phones are crap. It is a crap and useless design. Bezels are useful because they protect the screen at drops/impacts and protect the screen from accident touch at the edge from your hand/palm. People shouldn't care about pointless thi...