Counterpoint: Honor is taking Huawei's spot in China in Q1 2022

74.2 million smartphones were shipped in China in the first three months of 2022, down 14% compared to the same period last year. These levels are similar to the worst that the market saw during the pandemic, indeed the new wave and related lockdowns had a negative effect.

vivo edged out sibling Oppo to regain its #1 spot in the market, even though it declined to 19.7% market share. The selfie-focused vivo S12 and S12 Pro mid-rangers and the affordable Y-series phones (e.g. Y76s, Y31s) are credited for the company’s strong performance by the analysts at Counterpoint Research.

Oppo was affected worse than vivo and its share slipped to 18%, putting it in second place, just ahead of Apple, which rose to 17.9%. The iPhone 13 was the best-selling phone in China for the quarter, even though demand for the 13 series cooled off after launch. Apple is one of the biggest beneficiaries of Huawei’s downfall. 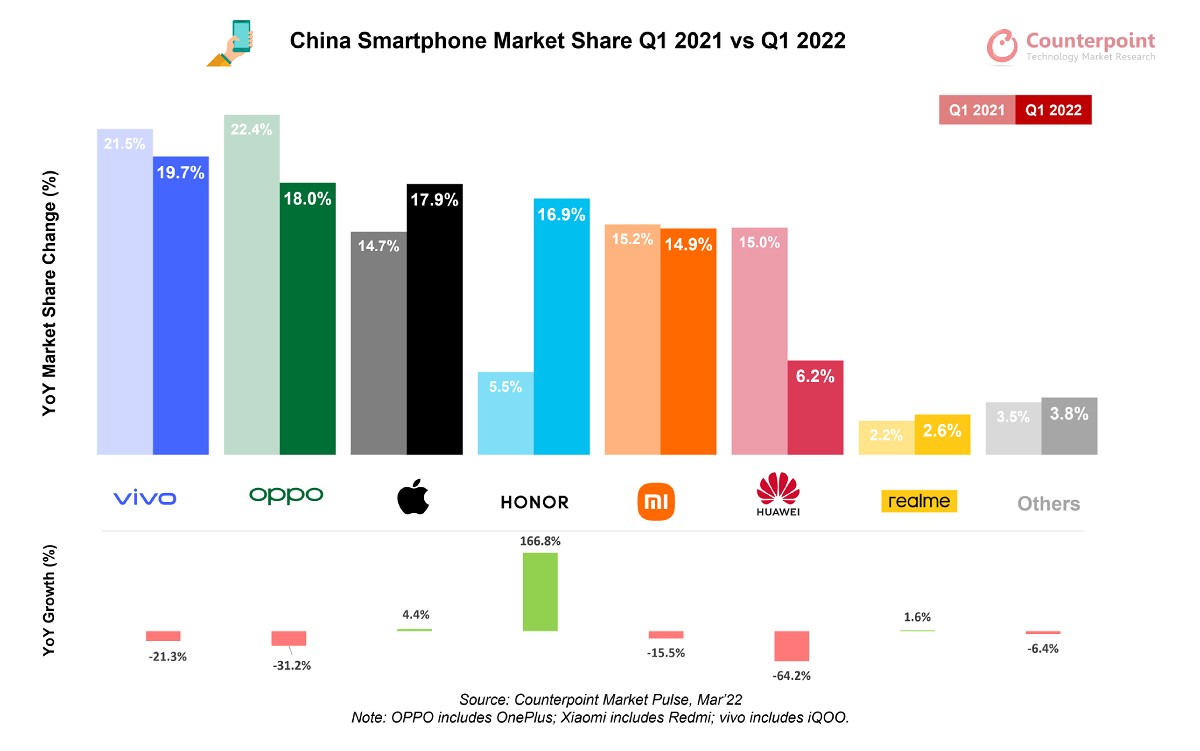 Counterpoint reports that the premium foldable devices made up less than 1% of smartphones sold in China in Q1. Limited supply of foldable display panels kept prices high, which didn’t help the situation.

Counterpoint: MediaTek and Exynos market share dips, Qualcomm and Unisoc on the rise

Huawei is more than a phone seller. it is the close to a research institut mixed with industrial units. It is something different. They are one of the most important patent applicant in the world Us targeted Hisilicon specifically. Honor sells i...

The impact that USA made to Huawei, hurts them which I won't deny. However, it was a fair and agreeable action, based on the points I raised earlier. And remember this is merely one company that was affected. If USA took this action for the &quo...

In the demographics I spoke about, there are some differences. Hardware goods are usually Made in China, as they're lower cost which is important (but not always). Yet software and services are usually USA Backed because they're more popula...