Realme has been busy lately with the introduction of its first flagship - the X2 Pro and its expansion to the European market. According to Counterpoint’s Q3 2019 Global Smartphone Shipments report, Realme was the fastest-growing smartphone brand and managed to crack the top 10 chart, claiming the number 7 spot.

During the July-September period, Realme exceeded 10 million shipments which translates to a staggering 808% year over year growth, making it the fastest-growing smartphone company. Realme’s accomplishment is even more impressive given the slowdown in global smartphone shipments. 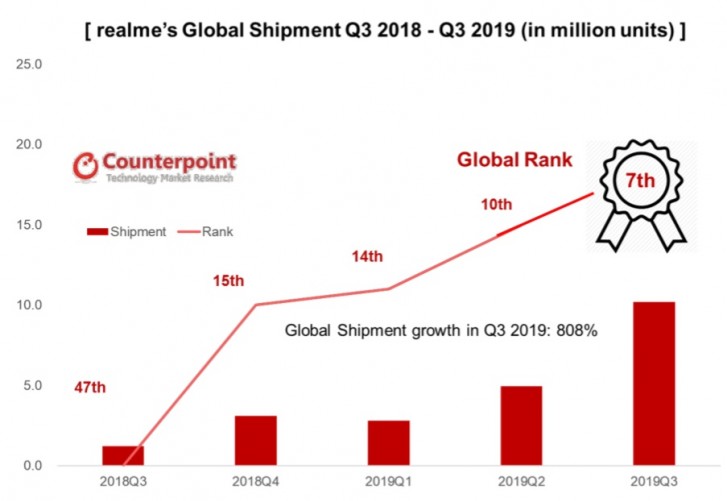 Taking a look at the broader picture, Samsung remained at the top in terms of shipments, followed by Huawei and Apple. Xiaomi, Oppo and vivo occupied the other three spots ahead of Realme. Earlier this month Realme announced it passed the 17 million user mark in less than two years' time.

The brand is now represented in over 20 countries across Asia and Europe and is looking to embark on the 5G scene with a phone powered by Qualcomm’s upcoming 7 series chipsets.

Yeah. I think xiaomi will be a good company to buy a smart phone for our salary

You forgot IQOO brother. Tomorrow maybe Samsung and Huawei will flood the market by cheating such as create soooo many brand.. Lol BBK is not confident to fight with Samsung with only 1-2 brand.. 5 brand is too much.