A known weakness of touchscreen PIN entry is that you leave fingerprints, so it's easy for someone holding your phones to tell which numbers you pressed (not their order, but it doesn't take too many tries to guess it). CyanogenMod has provided a solution  scramble the digits on the keyboard!

This way the position of your fingerprints doesn't give away which numbers were pressed since each time the numbers are in different positions. This does mean you can't just rely on muscle memory to enter the PIN, but security protocols are rarely pleasant. 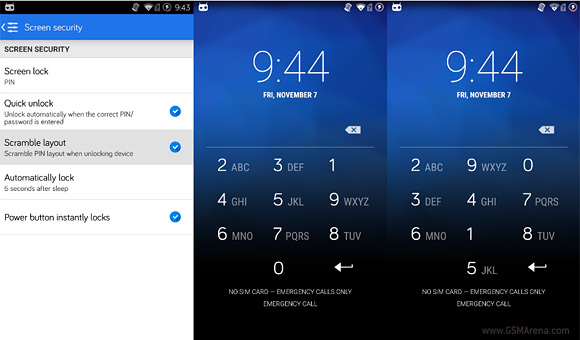 Unfortunately, it seems that this feature will land on the proprietary version of CyanogenMod that powers the likes of OnePlus One. It's not clear if it will make it to the open-source distribution.

Such an option is already available via an Xposed module  Xblast Tools  but that one is paid and (obviously) requires Xposed. Jailbroken iPhones have CodeScrambler for an identical feature. If you know of a solution that works on an unmodified phone, drop a line in the comments.

In related news, CyanogenMod 12 based on Android 5.0 Lollipop is already in the works.

Thats why u should use S5 or newer. Not a plastic motog.

Now I feel silly, somehow I assumed this would also apply to the SIM card unlock code. Makes perfect sense and is the reason why I hadn't seen the option before in M11.