Xiaomi made quite a splash in the smartphone realm with its Redmi Note 4 value offer. Naturally, the upcoming generation of Redmi Note devices has been basking is a surplus of fan attention, especially the cheaper Redmi Note 5A model. 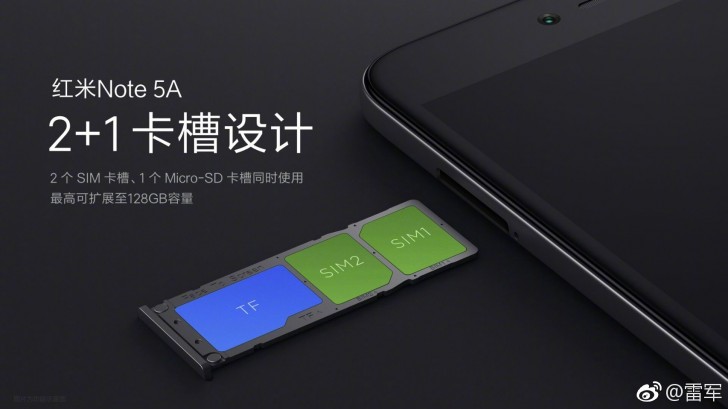 The unveiling event is already scheduled and only a few days away - August 21. There are still some questions to answer regarding specs and variants, but thankfully Xiaomi CEO Lei Jun hit up Weibo today to clear up a couple of things. For one, the Redmi Note 5A will be the first Redmi device with two dedicated SIM slots and a separate microSD one, for cards up to 128GB. Both the Redmi Note 3 and Redmi Note 4 relied on a hybrid design, so this is a notable step up.

The other piece of news concerns the front-facing camera. Recent specs leaks have been rather confusing in this area, but it is now clear that at least one of the Redmi 5A variants (presumably the top-tier one) will have a 16MP front camera with a selfie flash. Perhaps that leaves the cheaper version with a 13MP selfie snapper. Then again, 5MP has been tossed around as well. 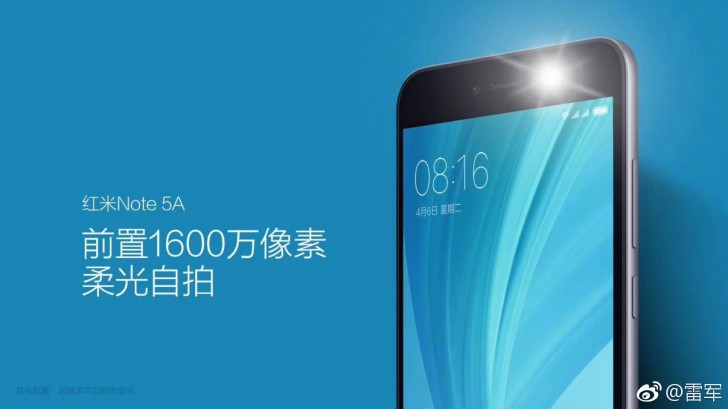 Speaking of tiers, we currently know of two main ones. Both are said to share the same 5.5” 720p screen (an LCD) and a 3,000mAh battery inside a metal body that’s 7.3mm thick. Basic connectivity should be identical as well: 4G with VoLTE, Wi-Fi b/g/n, Bluetooth 4.2, GPS and an IR blaster. As for the differences, the entry-level one will likely have a Snapdragon 425 chipset, 2GB of RAM and 16GB of storage. The "Pro" or "Prime" one is expected to ramp that up to a Snapdragon 430 or 435, 3GB of RAM and 32GB of storage. A fingerprint reader might be exclusive to the latter as well.

Thanks for the tip Faisal Munir

Redmi Note 5A to be made official next week, Xiaomi confirms

When Xiaomi tries an oppo and vivo!

Buy Mi then, not Redmi. Well actually up to this point, I think Redmi series can start using older IMX sensors, assuming their price has dropped enough to cut the cost. Note 4(X?) already uses IMX258 which was used by 4C as well.