The DJI Mini 3 Pro was unveiled in May, kickstarting the new line in the company's portfolio. Now leaksters have gotten their hands on images and details of the DJI Mini 3.

Leaked images of the DJI Mini 3

Like the rest of the series, it weighs 249g to get into the all-important A1 category that allows people to fly it without a certificate. The Pro version started at €830 with the RC-N1 controller, €1,000 with the RC controller and €740 for just the drone. The vanilla version will be a lot cheaper, somewhere in the €400-500 region (though this might be the drone-only price). 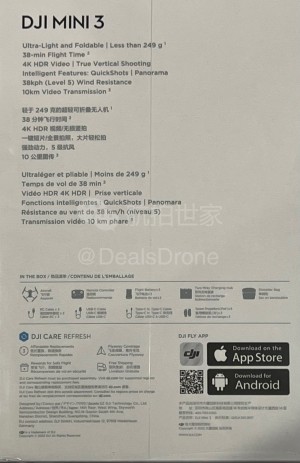 Details from the back of the retail box

Based on rumored specs, the DJI Mini 3 will exceed the flight time of its predecessor as it is expected to last up to 38 minutes (the Mini 2 lasted up to 31 minutes, the Mini 3 Pro up to 34 minutes). The top flight speed is the same for all three, 57.6km/h (16m/s).

By the looks of it, the vanilla Mini 3 will have less advanced obstacle avoidance system than the Pro drone – maybe even none – so sticking to slower speeds would be advisable for less experienced pilots.

The DJI Mini 3 will be available in different packages

The DJI Mini 3 is expected to be officially unveiled on December 9 (this Friday). There will be several configurations available – just the drone or the drone plus a controller (RC-N1 or RC). There will be a Fly More combo too, with two extra batteries, charger for all three, spare propellers and a protective case.

So does the Mini 3 work with the original Mini controller?

DJI one of all this default go to companies

No it's not because someone might be upgrading from a previous drone so they won't need two controllers.