Huawei’s latest EMUI 10.1 beta is expanding its availability in China to support the entire Mate 30 series as well as the flagship P30 phones. The actual beta for Mate 30 Pro owners tipped off yesterday boasting the 10.1.0.119 build number and brought some of the new EMUI features like the overhauled Multi-Window functionality and new fingerprint scanning animations.

Now, Huawei is giving the rest of the Mate 30 owners as well as those with a P30 and P30 Pro a taste of the new EMUI 10.1 alongside some new camera modes and features. Those interested in testing the new beta will have to sign up via Huawei Club app and make sure they are running EMUI version 10.0 beforehand. 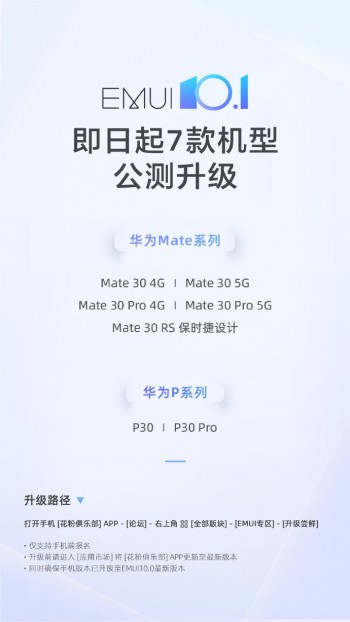 The Huawei Mate X is next in line for the EMUI 10.1 update. Huawei is also working on bringing the beta to the nova 5, nova 6 and Mate 20 line as well as the MatePad Pro but there is still no word on when the international rollout will begin.

Yes I also waiting for Upgrade My Huawei P30 Lite to Emui 10.1

U know most manyfacturers do it these way. Some of them go even by a operator basis.