Back in October, Huawei India introduced EMUI 9.0 with market specific features, including local languages support, Indian calendar and Paytm integration. The first two devices that should receive the update in India are the Huawei P20 Pro and the Huawei nova 3, both running the Kirin 970 chipset. 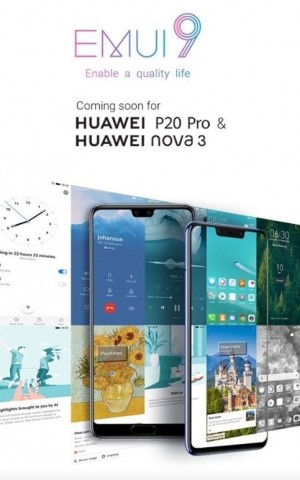 Aside from the market-specific features, EMUI 9.0 will also bring better one-hand operations, Android Dashboard, GPU Turbo 2.0 and better touchscreen responsiveness and connectivity. There will also be HiVision - an AR platform recognizing landmarks and paintings, acting as a direct Google Lens competitor.

The teaser clearly says “coming soon”, and we expect other Kirin 970-powered devices to receive the user interface shortly after. This includes Huawei Mate 10 and Mate 10 Pro, the regular P20, including some Honor phones such as the View 10 and Play, among others.

That's the reason i love oneplus, i'm on official Android P since last year while bearing half the price of the P20 Pro

No EMUI 9 update for Nova 3 yet. Could someone please confirm if the stable version of EMUI 9 has been deployed & installed?

Waiting for the EMUI 9 update on the Honor 9N (9i). So many Huawei and Honor phones, all in competition to each other's sub brand itself; every week a new phone coming in, as if they're flooding the market across all geographies equally, have the sam...