Energizer just launched its Power Max, Hardcase and Energy smartphone lineups that were intiially announced back in January. The Hardcase focuses on durability while the Power Max is mostly battery-centric, but big batteries are available across all models.

The first on the list is the Power Max P600S - a familiar-looking smartphone (we will let you figure out which handset it resembles) with a big 4,500 mAh without pushing the footprint too far, although it is a bit on the heavy side - 190g.

The next in line is the Power Max P550S with even bigger battery capacity - 5,000 mAh but with less powerful internals - MediaTek MT6737 chipset, 16GB internal space and 2GB RAM. There's a single-camera on the back using a 13MP sensor while the screen is a standard 16:9 5.5-inch IPS panel with 720 x 1280px resolution. You can expect considerably longer battery life than its more powerful P600S sibling.

Along with these full-fledged smartphones, Energizer releases a feature phone, the Power Max P20 - 4,000 mAh battery, Spreadtrum SC6531E SoC, 4MB RAM, and a 3MP camera on the back. The key selling point of the device is that the huge battery can serve as a power bank and charge your other devices. This makes it an excellent backup device if you spend your holidays in remote areas. 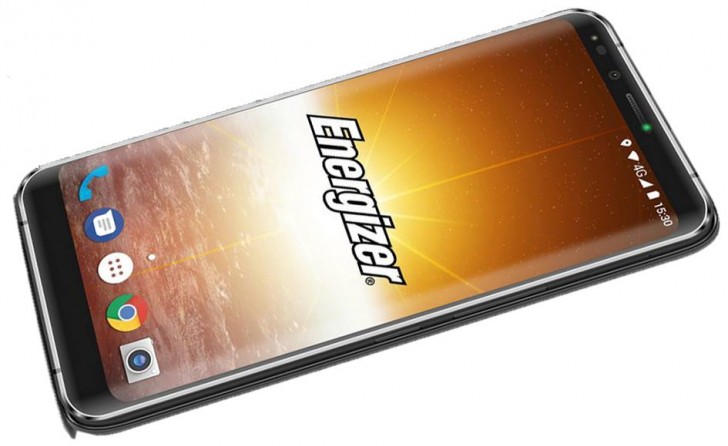 It has the a similar front to the P600S but tips the scales at 350g, which is understandable given the battery capacity, and runs a MediaTek Helio P23 chipset with 6GB of RAM and 128GB of internal storage. The back of the device houses a 16MP main camera and a 13MP secondary unit. Interestingly, the front also boasts a dual-camera setup - 13MP + 5MP.

And as for the Energizer Hardcase range, it is represented by the rugged Hardcase H550S with curved 5.5-inch IPS display with standard 1080 x 1920 pixel resolution, MediaTek MT6750 chip, 3GB of RAM and 32GB of internal space. A single 16MP camera sits on the back.

The device is powered by a 4,000 mAh battery, but the main feature of the H550S is its durability - it is IP68 certified and it's compliant with the MIL-STD-810G military standards. This fall, we can expect an even longer-lasting H570S model with 4,800 mAh battery.

The Hardcase lineup also includes the E100, E520, E400 and the H240S with the latter being the first Energizer rugged phone supporting 4G connectivity.

The Energy family consists mainly of feature phones with, big batteries and focus on portability. The most capable device is the S550S with 3,000 mAh battery, MediaTek MT6737 SoC, up to 2GB of RAM and 16GB of internal storage running on an old Android 6.0 Marshmallow. The lineup also includes the S500E, E10 and E20.

Why isn't anybody manufacturing -rechargable- battery cells, which could then be fitted into various enclosures - to fit all the phone models... Nobody wants to be the next world-billionaire? Strange.

Put flagship specs with what people want plus that battery and you'll have people screaming take my money!

Man yes but try to understand a phone with SD845 or Latest Kirin and 16k battery would last on standy mode maybe half year :-) So its maybe a good idea the phone its self offers helio P20. Its not a best CPU but its not that bad. Compared to ...