Nokia launched the 2V smartphone in the summer of 2019 as a rebranded Nokia 2.1 for Verizon. It ran Android Pie (Go Edition) on its limited 1GB RAM. Now the phone might get a successor as a phone called Nokia 2V Tella has been spotted on Geekbench. 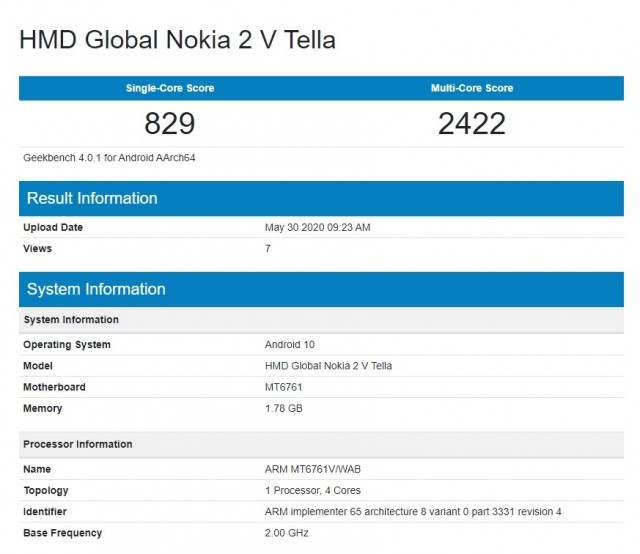 The device by HMD Global is running Android 10 OS and has an MT6761 chipset, which is better known as Helio A22 by Mediatek. We are also looking at 2GB RAM, which might allow it to boot the fully-fledged Android OS, instead of having the basic Go version for lower-performing phones.

The Nokia 2V Tella doesn’t surprise us with its scores on Geekbench 4.0 at all - 829 for a single core and 2,422 for multiple cores is close to what we reached 1.5 years ago when the Redmi 6A, powered by the same chip, was in our hands.

Don't even consider it, dude... Helio A22 is very much like SD410, shitty PoS. I bet my ass u'll be seriously pissed with the performance as u'll encounter lag fest from day 1.

This phone is almost-certainly the Worldwide version of the "Nokia C2" "Tennen" & "Tava" which are A22-utilising entry phones locked on the carrier "Cricket" for the USA market. I am certain that all specs will be identical. With Bluetooth 5.0...

Marketing purposes. Like when LG named its phone „Chocolate“ and people with less experience about a phone's performance were impressed. Though, Nokia's names are a bit… uninspired, to put it mildly.