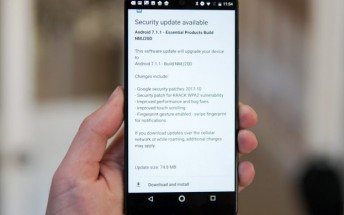 Despite its recent price drop clearly signifying that sales aren't going as well as anticipated, Essential is still pushing out software updates for its first smartphone, the PH-1. The latest such release is going out over-the-air today to all the units in the wild, as a 74MB download.

It is Android 7.1.1 Nougat, build NMJ20D - so no Oreo here, not yet at least. This update is important, however, for other reasons. First off, it brings with it the October security fixes from Google. Second, it also patches the recently unveiled KRACK vulnerability in the WPA2 protocol that secures Wi-Fi connections. If only for this reason, you should install the new build as soon as possible.

But wait, there's more! You will also get improved touch scrolling and the fingerprint gesture enabled. This means you'll be able to swipe down on the fingerprint scanner to access the notification area without touching the screen. Finally, the usual unnamed bug fixes and performance improvements are said to be baked in too.

Include me in the 5000 or the people who are buying due to the price drop. This phone is great. I think the folks reviewing this device were biased. Apple ain't all that anymore. This device is better then any Apple phone. Buy it so you can try it, y...

5000 users and still covered by gsmarena, why?

well I guess I'm one of those 5000 users.....LOL I am really liking the device!! I am really proud of Essential they are correcting their mistakes and making right by users!!!