After the US, internaional Samsung Galaxy Note5 units have started receiving the Nougat update. 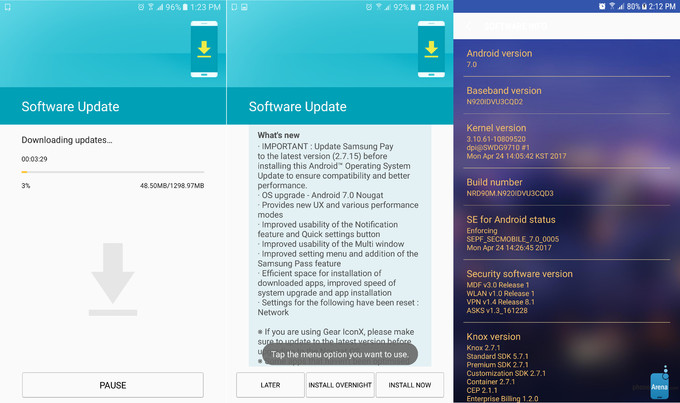 The update weighs in at around 1.3GB, and brings along Nougat version 7.0. An important point worth mentioning here is that users should update their Samsung Pay app to the latest version (2.7.15) before installing the update. The change-log says it'll ensure "compatibility and better performance."

Aside from the new OS, the update also includes some other minor changes. As is usually the case with OTA roll outs, it might take some time for the update to hit your device.

T-Mobile's Galaxy Note5 is receiving the May security update

Samsung Galaxy Note5 currently going for $300 in US

You get all the Nougat features as wooty said, what do you want more from it, so many useful features update to a older version don't use more battery who will believe that? You should be rejoice as wooty said you have miss one feature.

Hi All, Any IDEA when Taiwan Model will get Nougat Update for Samsung Galaxy Note 5 DUAL. Model: 9208 Firmware: N9208ZTU3BQD1 Please update. Thanks in advance. Regards, BJ

Hi all, After doing a little bit of digging in finding the reason for draining the battery after the 7.0 update, I realized that VoLTE setting (when you pull down the quick settings bar) is enabled by default which I believe one of the reasons why ...