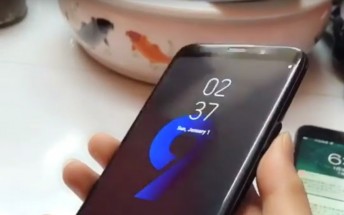 Well, this is ahead of schedule  the Samsung Galaxy S9+ just appeared in a short hands-on video. And its a fully working unit too... though we have a sneaking suspicion its a copycat rather than the genuine article.

Theres not much to say about the front  its dominated by an Infinity Display as expected. But its not centered, the bottom bezel is thicker than the top one. And whats with the chunky Power button?

The app drawer is even more telling  theres an FM radio app for one, which the original will (sadly) lack. Not to mention that theres no Galaxy Apps shortcut. And S Planner is now Samsung Calendar, theres no Heart rate app (its Samsung Health), we can go on.

The video shows a brief glimpse of the camera app which differs from the app on the Galaxy Note8. Not that Samsung cant change the design, but were missing the x2 button, which switches over to the telephoto camera (which is seemingly present on the back).

Oh, well. A valiant effort  and impressive because it comes ahead of the true Galaxy S9+.

Samsung Galaxy S9 and S9+ pose for a photo [Updated]

No! it's a SAFELINK phone and I'm sure about it!

But it will be for the reasons i said. ANyway Samsung never made a good phone just an expensive ones. They have a huge oproductions which lacks in quality as always.

Man that's non sense. Fake will never be better than the original.