FC Barcelona Edition of the Oppo F1 Plus leaked

Oppo's partnership with Spanish football club Barcelona is a few days away from entering its second year. In 2015 it gave us the Oppo R7 Plus FC Barcelona edition, and today we hear that the Oppo F1 Plus (or Oppo R9 as it's known on its home market in China) will get the same treatment.

Whether it will be marketed as R9 or F1 Plus (after all it should be available globally, so the latter might make more sense), the limited edition will be available in red or gray color schemes, a new leak reveals. On top of the exclusive paint jobs, the club's logo and an inscription on the back will tell onlookers that it's not just a regular F1 Plus. 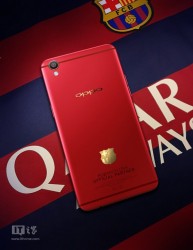 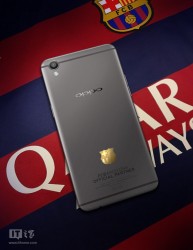 Which is exactly what it's going to be on the inside, at least if last year's practice continues into 2016. The Oppo F1 Plus has a metal build, 5.5-inch FullHD AMOLED display, Helio P10 chipset and 13MP/16MP camera duo (higher-res selfie shooter, yes).

It's yet unclear when exactly the FC Barcelona edition will be officially announced, but "soon" sounds likely.

I hate the phone, because it drains so quickly, and the price is so costy. ILOVE my cherry mobile phone... cheers to Filipinos worldwide, MABUHAY!