On Friday, the United States FCC has announced that it will take a couple of measures to expedite the development of 5G in the US. The race to lead the 5G race is one that President Trump fully intends to win, especially with the economic boosts and jobs that come with bringing high-speed internet to customers in rural parts of the US.

It’s a race our great companies are now involved in. According to some estimates, the wireless industry plans to invest $275 billion in 5G networks, creating 3 million American jobs quickly, and adding $500 billion to our economy. – Donald Trump

The measures haven’t yet been put into place, but today’s announcement proposes the bidding procedures for the biggest auction of spectrum in US History. The bands to be auctioned later this year include the Upper 37GHz, 39GHz, and 47GHz spectrum bands. 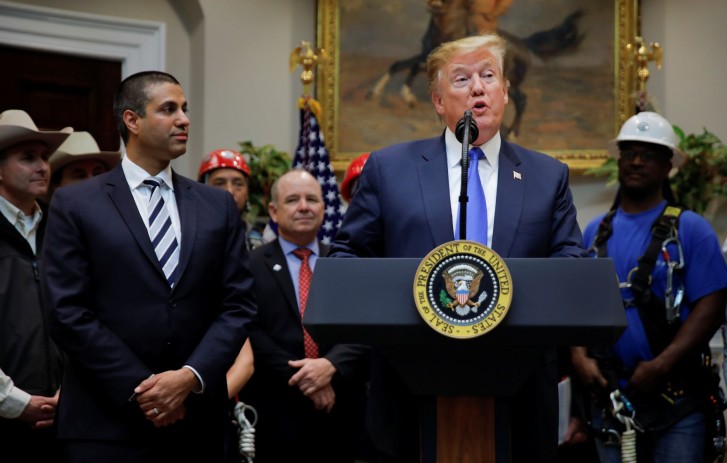 According to the FCC, this auction will “promote the development of 5G, the Internet of Things, and over advanced spectrum-based services. The FCC plans to begin auctioning available spectrum starting on December 10.

To accelerate and incentivize these investments, my administration is freeing up as much wireless spectrum as needed [...] removing regularity barriers to the buildout of networks. The FCC is taking very bold action, bolder than they’ve ever taken before, to make wireless spectrum available. – Donald Trump

The proposed new regulations would allow “Fixed Satellite Service operators to provide faster, more advanced services to their customers” by employing a 50 GHz band. The current rules “impair the ability of users to deploy small, next-generation networking devices on their own property,” The proposed changes would allow private property owners to install “hub and relay antennas” to expand the reach of 5G.

Pertaining to the use of Huawei equipment in the US, FCC Chairman Ajit Pai addressed security concerns, but tiptoed around actually mentioning Huawei, the Chinese telcom company. Here’s what he told CNBC.

Verizon has already launched the first US 5G network in Motorola’s home market of Chicago, IL last month. The only smartphone to currently support the network is the Moto Z3 with the bulky 5G Moto Mod.

Very funny or what did you want to say???

Yep. It's all about the money for them

Would have had it by now if they just used the Huawei stuff... ^_^;