It's that time again - OnePlus is prepping to launch the successor to this year's OnePlus 6. Historically, the refresh usually comes sometime in November, so there's still plenty of time until the release. But that doesn't mean that the smartphone isn't ready to begin its worldwide certification and testing. 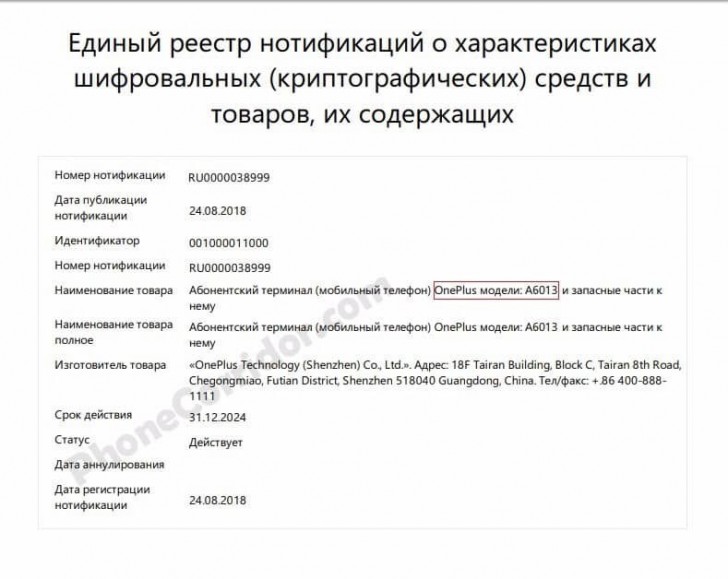 First stop - EEC (Eurasian Economic Commission). A leaked document names a device with model number A6013. It has been certified yesterday and the guys from PhoneCorridor were fast to pick it up.

Unfortunately, there's nothing else we can gather from the report, except the model number. No specs or features were mentioned. However, given the fact that every OnePlus device is a derivative from Oppo's R-series, it's safe to assume that some of the features, hardware and design will be borrowed from the recently announced Oppo R17 Pro.

We could be looking at a triple camera setup (let's just hope that this time at least two of those cameras are useful for something), improved Dash Charge, based on Oppo's SuperVOOC (possibly called Warp Charge) and a similar waterdrop notch on the front.

Sadly, the under display fingerprint reader seems like too far-fetched, as OnePlus usually waits for some technologies to get cheaper and more reliable in order to keep the costs low. Basically, Oppo's R-series are the guinea pigs and OnePlus' phone reap the benefits in the end.

Of course, all of these are just wild assumptions on our end and there's still plenty of time until November.

Hi there! I could have sworn I’ve been to this website before but after browsing through some of the post I realized it’s new to me. Anyhow, I’m definitely happy I found it and I’ll be bookmarking and checking back " OFTEN".

What skin? Have you ever used a 1+ device or you just a typical whiner? The is no difference skin wise between a 1+ and an android One device, except 1+ having additional candies running under it which make Oxygen OS way better then featureless stock...

no . its just a fake pic and does not have 3 cam