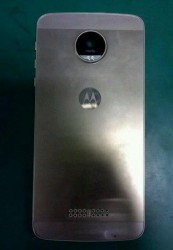 There's no information on specifications just yet. Looking at the photo, the upcoming Moto X (4th Gen) has a redesigned camera housing, protected with a large glass. On it, you can spot the Moto logo as well as a dual-tone flash. Below the camera, there's the usual Motorola logo, which look to sit flush with the back this time around.

We assume the top and bottom of the back is made of plastic in order for the antennas to work. The speaker grille is also at the bottom, but we don't know if it's stereo or not.

I actually wanted to get the X Style, but I decided to stay away from it (cuz of bad battery) and to wait for the 4th Gen for better battery, smaller size and fingerprint reader. By the way, this is only a prototype, one of many. So I hope that...

It looks VERY promising, especially the camera, judging by the size of its protruding compartment. I hope it isn't there just due to poor internal design, but because of camera units required size, a'la pureview.