Fitbit is known for its fitness trackers, but now the company has decided to dive into the smartwatch deal. To do so, it developed its own custom OS – so this isn’t Android Wear, Tizen or anything you know so far. No, the Fitbit Ionic watch runs the Ionic OS.

That has its advantages – like multi-day battery life, more than four days on a charge. And if your exercise routine requires a lot of GPS tracking (GLONASS too), the watch is good for up to 10 hours of operation. Speaking of exercise, the usual training modes are available as well as swimming. 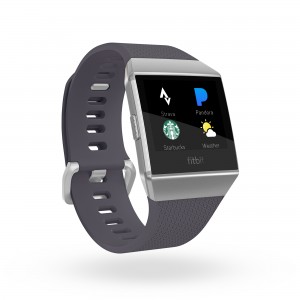 The Ionic smartwatch is water resistant up to 50m and has a swimming mode. It also has a built-in optical heart rate tracker. It will show real-time heart rate zones during training but also track your resting heart rate 24/7. Heart rate variability is also tracked. The watch will gain Audio Coaching next year.

Let’s talk about Ionic OS for a bit. You can’t use Android Wear apps, but you still get rich notifications from Facebook, Instagram, Snapchat and others. The watch can run apps as well, Strava, Pandora and AccuWeather are already working on theirs. Speaking of, there’s 2.5GB of available storage for 300+ songs to listen to offline (over Bluetooth). You can sync with the Pandora app, but you need a subscription (Plus or Premium) and is US only.

Mobile payments are supported as well, Visa, Mastercard and American Express cards from the top banks “in over 10 markets” can be used.

The Ionic Watch will sell for $300 starting in October. In North America, it will be available through major retailers like Amazon and BestBuy, as well as carrier like Verizon. Exchangeable bands will be available ranging from leather to breathable sport bands.

PS. The OS could be a derivative of the Pebble IP that Fitbit acquired late last year. The official info doesn't mention it though, so it's not clear if Pebble apps will be supported (it would be a great way to pre-stock the app store).

fitbit notification can't work with android version 10, any one can help?

Seems Brits in the uk are getting ripped off again by Fitbit as there charging £299 for the same watch that you can buy In the U.S for $300 At today's exchange rate $300 = £237 Looking at the specs apart from swimming, GPs and putti...

Beats hold what place?!! As far as I see no one with at least two grams of brain would buy headphones from them.