Following yesterday’s Meizu 16Xs announcement, the Chinese manufacturer is officially bringing the latest rendition of its Flyme OS to 14 of its existing phones.

Flyme OS 7.3 brings an improved system-wide optimization algorithm, camera night mode alongside visual and security improvements. The update will be the last in the Flyme 7 series before Flyme 8 comes out. 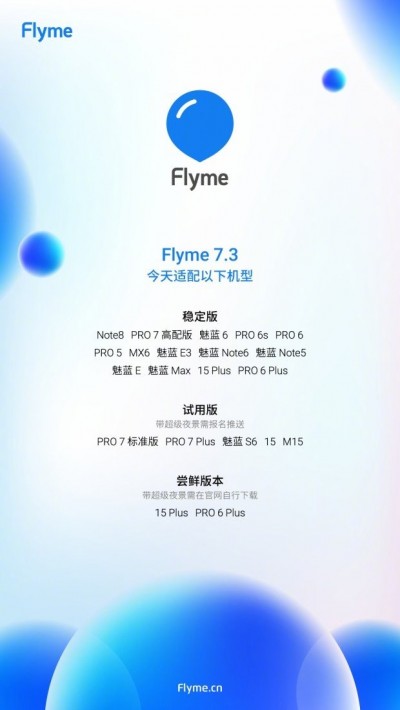 One Mind 3.0 is the highlight of the new firmware. It brings a system-wide background management process and will optimize device performance based on the usage patterns. Meizu said the reworked AI enhancements should result in faster app launches and improved day to day performance across the board. The camera app will receive the Super night scene mode first introduced on the Meizu 16s for better low light photos. Other additions include the option to add colorful images to the always on display and improved haptics in the game mode. The new update will come with a gradual release schedule and Meizu claims more phones will get it in the future.

My Meizu M2 did not get a single Android upgrade. I had it for three years and it was stuck on Android 5.1. Unacceptable. If they change this I might consider their phones again because Flyme is a good skin an Meizu hardware is to class.

Updated my Note8 this morning. The performance of the device climbed about 15 percent. Thank you, Meizu!