Galaxy Note5 gets Android Nougat update in Turkey, should spread to other markets soon 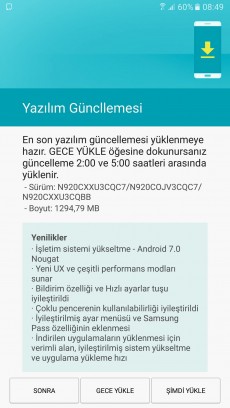 Today Samsung has started rolling out the update to Android Nougat for Galaxy Note5 units sold in Turkey. This follows similar rollouts for the Galaxy S6 and S6 edge, which have commenced earlier this month. The presence of Nougat on Note5 units in the wild in Turkey means that you should expect the update to hit other markets very soon. Samsung's rollouts usually go country by country, but once they start in a region they go out pretty quickly.

As you can see from the screenshot to the left, the Nougat update comes over-the-air as a 1.3GB download. The firmware version for the new build is N920CXXU3CQC7.

As with Samsung's other Nougat updates, expect to see a revamped user experience in this one, along with all the enhancements that Google's packed into Android 7.0. Owners of the flagship phablet from 2015 will surely be happy to finally be able to play with all of that.

Samsung Galaxy S8 with 6GB RAM will only be available in China, rumor says

Note5 Nougat update Finally reach to my UAE model,thanx God wait is over!!

Where is the update for s6 edge plus then ? :( still waiting

The mobile speed is x2 compared to the 6.0