The answer to the question "so which is the next Android device maker to adopt the elongated 18:9 or 18.5:9 aspect ratio?" is now clear. The company in question is Gionee, as it's been revealed through a benchmark listing that it's working on just such a device.

For now it's identified only by its model number (or codename) SW17W08, and someone in possession of a prototype ran GFXBench. Thankfully, that means we have a pretty good idea of what to expect from this handset. 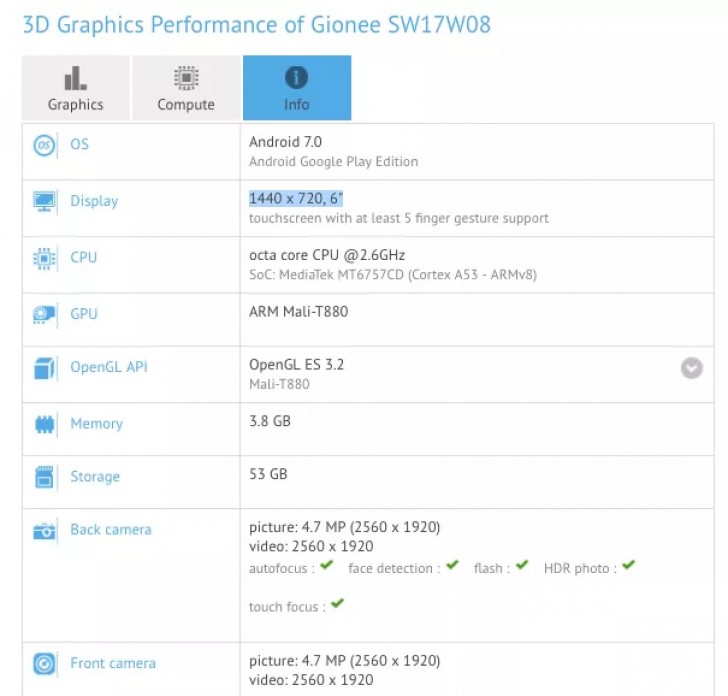 It sports a 6-inch 1,440x720 18:9 touchscreen, for example. This means the display will be larger than the one found inside the recently announced Micromax Canvas Infinity, but the resolution is exactly the same, so the pixel density will be worse.

The upcoming Gionee smartphone runs Android 7.0 Nougat, and is powered by MediaTek's Helio P25 chipset, which boasts a 2.6 GHz octa-core Cortex-A53 CPU and a Mali-T880 GPU. 4GB of RAM and 64GB of storage are built-in, while both front and back cameras are said to be 5 MP.

While that's perfectly fine for a selfie snapper in a mid-range device like this, we assume there's some mistake regarding the rear shooter. Perhaps Gionee will employ another dual camera setup, like in the A1 Plus - which has a 13 MP and a 5 MP sensor on the back - and the benchmark is only seeing the latter.

Gionee A1's latest update is all about selfies

gionee is the best brand in offline market 2700 crore turnover

i want to know Gionee's financial report. How they are exists after so many fail product?

they meant edgeless... its either bezeless or edgeless... Sharp needs to educate the other brands to use proper terms for their display characteristic...