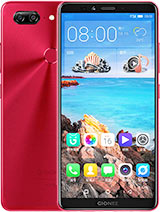 Why I hate Gionee ,the don't upgrade there phone,I have been using Gionee m6 since no upgrade to nougat version, so angry

It looks like Gionee is beating Xiaomi in its own game. About time somebody did.

Phone looks too good for its price WTF

is this available in south africa????

Although I don't like mediatek chipset but this phone looks very good and it's very tempting. Nice phone. It should have been snapdragon then it would be a great phone, but nice phone any way.

Slightly a better choice than the Meizu Pro 7 (Mediatek P25).

Alien , 26 Sep 2017Where are these phones sold? I've never seen this brand in ... moreYou'll find them in asian countries.

Alien , 26 Sep 2017Where are these phones sold? I've never seen this brand in ... moreIn East European Contries these smartphones are sold as Allview (rebranded in Romania-Brasov Factory) and in America rebraded as BLU.

Where are these phones sold? I've never seen this brand in Europe.
Not that I'd buy a MediaTek chipset anyway.

Asus called, they wanted their brushed metal back

As specs-wise on paper, seems not too bad at least for its respective price, etc., segment.