Gionee M7 to get new color variants at November 26 event

Chinese maker Gionee will announce a bunch of new smartphones during its November 26 event, it has now been revealed that the already official M7 will also have a presence there.

A new teaser shared by the company reveals two new color variants for the device will debut - Maple Leaf Red and Amber Gold. 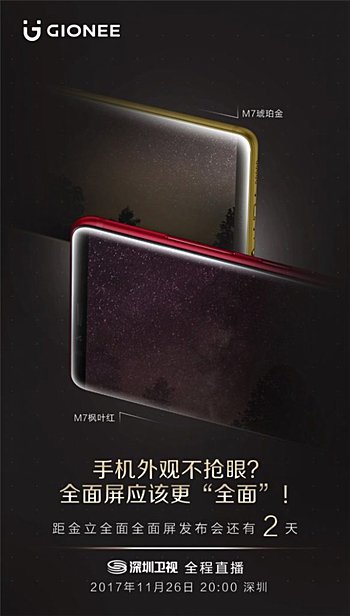 It's worth mentioning that the phone already comes in a Maple Red option, so we're not sure how the new Maple Leaf Red model will be different from it. Or it could also be that both colors are same, just that the model hasn't been available so far.

Amber Gold, on the other hand, is entirely new. No information on pricing and availability has been shared yet.

Gionee M7 Plus shows its full specs in benchmark leak

Maple Leaf Red and Amber Gold? For some reason, the image reminds me of Strawberry jam and Pineapple jam! Yum!