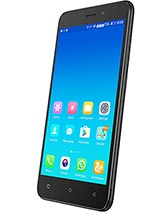 I bought the device on 12 September 2017 and I am using it till now .Good battery back up .I am a moderate user but 2gb ram is not enough . Formerly it was well in performance but now I am facing problem in ram . Once I get an update in software but after that I never received an update within this five years . It's a problem in updates . But afterall it's good with its camera performance and battery. It also receives heating problem while you are on internet for half an hour .

Anonymous, 11 Apr 2019The worst battery !!! I charged it for 6 hours and the batt... moreBy the way I bought this phone 2years ago, it has been a very nice phone until last month when the battery swell and nolonger hold charge for long. The good news is that I found a new battery with same specifications but only terminals had to be changed and it's now an amazing phone, functioning as it was when I bought it.

The first gionee phone I used.
No regrets.
I love it.
It got stolen after about 2 years and I still miss it

Having Issues with very low WiFi connection. My other phone is superfast on the same WiFi

When I press system updates, it say check your internet connection but internet is working fine.

navilrac19, 06 Jul 2018I have this phone and i like it so much! If you know how to... moreWhat are u saying about it's battery backup.

Gionee X1 is a good phone.If you've once used gionee phones,you will know how to use this gionee X1 perfectly. I would recommend you use a gionee phone before buying the Gionee X1

I used it for 15 months now, last month I replaced the charging jack & USB cable & the sound system could use some improvements too. Overall it's okay for me.

just bought this phone less than three months ago n the battery is heating up.CPU is overheating every time.When you have to charge the battery it takes soooo long.The warrant doesn't cover the battery and the charger.I really loved it when i saw the reviews online but now am kind of disappointed

worst phone. Better gionee get out from India.