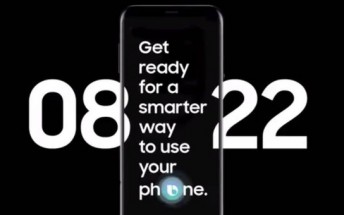 Samsung looks all set to globally launch its Bixby virtual assistant today. The company shared the following ad on Facebook, confirming August 22 as the roll out date.

The process for global launch kicked off recently when the company started rolling out updates to Bixby apps - including Bixby, Bixby PLM, Bixby Wakeup, Bixby Dictation and Bixby Global Action - in several markets around the world.

Despite the roll out, the functionality was not enabled then. So the pending server-side flip should happen today.

Assistant must have a power AI system which no one can provide nowadays, people just have to learn to stay with it, not the device learn people habits.

Yeah the Sbahn has been lagging a lot these days, especially the S2...

I think you are delusional and you don't even know what is lag, I never had any lag problems with touchwizz, you just complete troll