Canalys posted today its analysis on the smartphone market in Q3, just a day after the report for China. For the first time in two years, the market saw an increase in total sales, and Huawei’s performance at home might be a big part of that.

The Shenzhen-based company posted a 29% annual growth, but looking at the bigger picture, it actually managed to sell fewer phones outside China than the Q3 period last year. Between July and September 2019, smartphone makers sold 352.4 million units, which is just a percent more than the 348.9 million sales last year, but it is a positive thing - the last time the market saw an increase on a yearly basis was back in the fall of 2017.

Samsung remains the global leader of shipments, with an 11% increase in shipments YoY and gained two percentage points, thanks to an aggressive new product strategy. The Galaxy A lineup replaced the affordable Galaxy J family and Samsung introduced no less than ten different models to match every available market niche there is.

There were also 5G models of the Galaxy S10 and Galaxy Note10, which also helped boost sales, compared with 2018 numbers.

Rushabh Doshi from Canalys said that 5G “is the next battleground for Samsung”. It is one of the few companies that designs its own chipsets and modems and is not relying on third-party suppliers like Qualcomm. A testament of this future path is the Galaxy A90 5G and the Exynos 980 chipset with an integrated next-gen modem, both announced in the previous quarter. 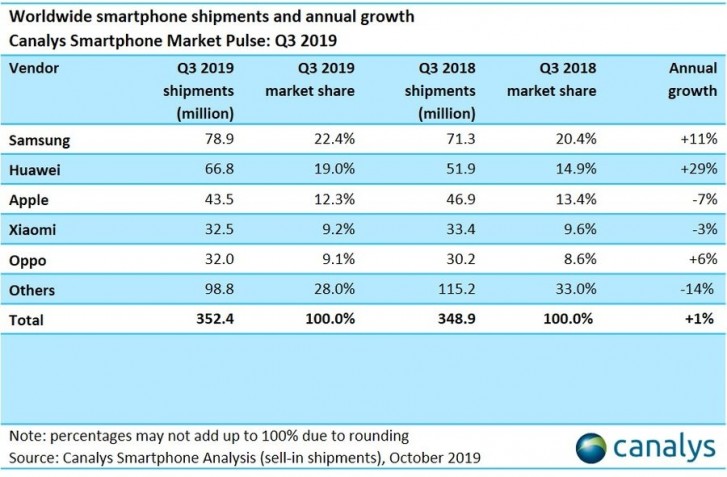 Apple introduced three new smartphones with an extra wide-angle camera and that managed to save the freefall - now Cupertino declined only 7% in sales, instead of a double-digit drop seen in Q1 and Q2 2019. Vincent Thielke, a research analyst at Canalys, thinks Apple is trying to convince customers to wait for its 5G devices in 2020.

Right behind the iPhone maker are Xiaomi, Oppo, and vivo - they all have launched at least one 5G smartphone in 2019, meaning they might be up for a piece of that pie Apple is about to lose.

No hope for Apple doesn't make any sense i'm a Fanboy dude?? I'm Apple Lover before. I have contribute in Cydia Tweak last time. What happen on Apple after Steve Job died, no more jailbreak. Even there's a Revoke Tethered version i never ever like it...

Surprised to see Huawei sell so many phones. Right up there with Samsung. Good job. Xiaomi and Oppo will soon surpass Apple in marketshare.