Google just released version 96 of its Chrome browser, which is now looking more in line with Windows 11's UI. Along with the stable Chrome 96 release, the search giant also announced Chrome 97 beta with a new privacy feature. Or rather a revamp of an already existing one.

The new menu puts all the site data into one place so you can easily track which sites are storing data on your computer. That includes cookies, of course. The new controls over site data are located in the same sub-menu - Settings > Privacy and Security > Site Settings > View permissions and data stored across files. 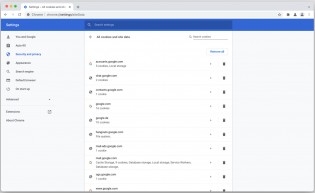 With the introduction of the new menu, Google is getting rid of the granular controls over cookies and site data. The reason behind this change is that Google thinks it's more straightforward to the mainstream user and it's likely to lead to some broken experience on certain websites. Still, these options will still be available to developers in DevTools.

Lastly, Chrome 97 beta includes support for WebTransport API and CSS media queries for checking the HDR support status of a given device.

Personally I wouldn't touch anything from Microsoft. Chrome is getting bloated, but we knew this from the day it started to chase version numbers (which Firefox followed some years later). Chromium-based browsers minus the bloat of of...

Long time chorme user but it's memory usage was getting too much. Now a happy Edge user. It's got all the goodness of chrome without being a memory hog.

My old laptop opens websites in a second. Try to add a good adblocker and add IRPStackSize to registry. Will help.