Google's smart video messaging app Duo might soon get a feature that's aimed at making it easy for users to keep track of calls made through the app. Basically, the functionality is nothing but the integration of Duo's call history with user's phone call history.

The following pop-up has been observed by some Duo users after making a call. 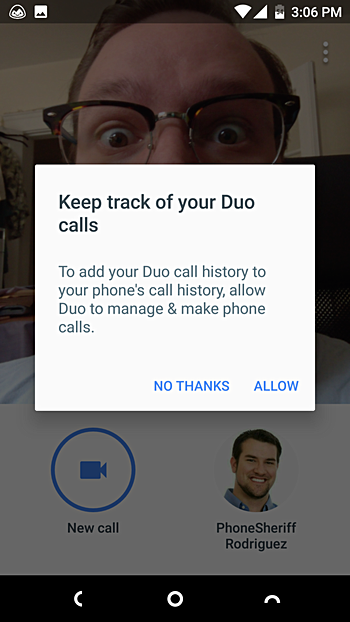 It's worth mentioning that the feature isn't live yet, meaning even if you tap the 'ALLOW' option in the prompt shown above, you still won't see your Duo calls in your phone's call history. But the prompt itself is more than an indication that the functionality is coming.

The message in the prompt also makes it clear that the feature also includes the ability to manage and make phone calls.

yes , i fully agree with you. it such a simple and easy to use app.

This is such a nice and simple calling app. Unfortunately no one seems to have downloaded it so I ended up deleting it too. Maybe it'll be "discovered" one day. It deserves to succeed.