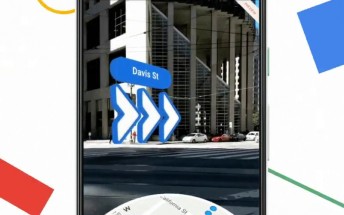 Google has been planning to bring AR walking directions to Maps for a while now. The company announced the feature a year ago but said it was not satisfied with its performance. We saw a limited test run for Google Maps Local Guides at the beginning of February and now finally Pixel owners are getting the new AR Maps option.

Once activated, the AR feature will immediately fire up your camera and present you with a live view of your surroundings with a cutout at the bottom of the screen for the actual map. From there, Maps will provide helpful on-screen information such as banners with street names and arrows for directions.

Google warns that walking and staring at your screen simultaneously is not the safest option. The feature is certainly useful in situations when your GPS signal is fuzzy and youre trying to figure out which direction you need to head in.

Theres no word on further availability for now but we can expect Maps AR to come to more, non-Pixel devices soon. The only factor is that they have to support both ARCore and ARKit. Google also notes that you will encounter higher mobile data consumption as well as increased battery drain during AR Maps sessions.

not funny at all. innovation has to happen. battery drain, data drain or not. get on with the program. we don't sit here and do nothing worrying about data and battery dude. Think before you talk or hahahahaha

Higher data costs and battery drain. Great. Just to get racing-game style directions so I wouldn't get lost. Ahahahah~

That's actually pretty dope. I'll check it out and hopefully it works without getting me lost, heh.