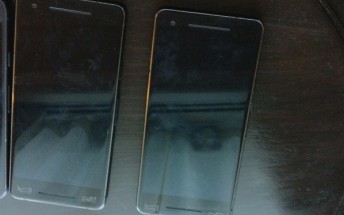 Following a barrage of leaks about it, Google's upcoming Pixel 2 has decided to stop by the FCC. The certification process has thankfully resulted in a few screenshots from the phone's UI, which reveal a few (more) details about it.

First off, the Pixel 2 is made by HTC, as previously revealed by countless rumors (the Pixel XL2, on the other hand, will be LG's doing). Its frame will be squeezable like that of the HTC U11, though in the Pixel the feature will be called Active Edge. By default this will let you invoke the Google Assistant by giving the handset's frame a squeeze.

The Pixel 2 that visited the FCC ran Android 8.0.1, with the August 5, 2017 security patch level. This should be a near-final build of the next Android version, since the latest available Developer Preview is still 8.0.0. Or maybe that .1 is going to be a build exclusive to the Pixels.

The handset sports 64GB of storage, a tier not found in the original Pixels from last year (and which we hope will be the base level, with 128GB an option for added cost). Finally, the model number for this specific Pixel 2 unit is G011A.

That too will disappear like the headphone jack, removable battery, IR blaster, 3D screens, pressure sensitive displays and so on.

Why wait that long lets wait and see what the Pixel XL2 will look like.

I can see Samsung making a traditional Galaxy phone with squeezable frame on its edges.