Google has significantly discounted the Pixel 3 and Pixel 3 XL this week with deals in the US, Canada and Europe. The two phones are up to $300/€300 off, but there’s a catch. 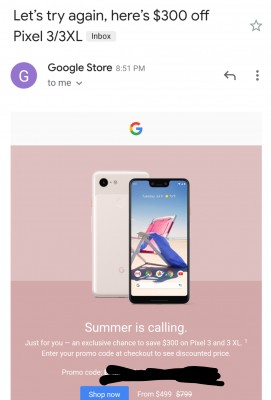 In Canada, the phones are CAD250 off.

Moving to the old continent, Germany gets the best deal - €300 off. That's from the official Google online store, you can save an extra €20 if you buy from MediaMarkt.

Ugly phone and ugly phone XL is 300$ off now...buy and destroy them

They are 500EUR off in my region and still no one buys it.