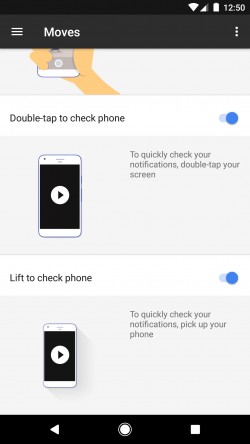 Google's Pixel and Pixel XL smartphones have started receiving an intriguing software update in Canada today. It seems to be out regardless of which carrier you use, and it brings with it a couple of highly anticipated new features.

Two entries have been added to the Moves section of Settings, as you can see in the screenshot to the left. You can now double tap your Pixel's display to get it to wake up and show your notifications, or you can achieve the same purpose simply by lifting it up.

Obviously you need to enable either of these functions (or both) first, but after that it's going to get a lot easier to glance at your Pixel's screen without pressing the power button or using the fingerprint scanner.

The odd thing about this update is that it carries build number NPF26J, and so far the letter "P" has showed up in that second slot only for preview releases of Google's software. That's what leads us to think that it might have been an accidental outing. Or perhaps the company has changed the way it codifies its build numbers and the presence of that "P" over there doesn't mean anything after all.

The over-the-air update comes in at around 261MB, and it's still Android 7.1. There's no word yet about the rollout hitting other countries, but if it wasn't a mistake then do expect that to happen very soon.

Google Pixel and Pixel XL get £70 discount in the UK

I don't use double tap to wake. The app I recommended doesn't even have that feature. I turn on my phone's display just by lifting it up (gyro) or by moving my finger in front of the proximity sensor. I don't even have to touch the phone. And when ...