Just as the latest Apple keynote comes to a close, we’ve gathered up the most important aspect of the new Apple products – pricing. We’ve compiled prices for the US, UK, Germany, India, China and Japan markets in the two tables below. 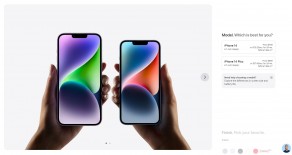 iPhone 14 and 14 Pro series US pricing

Storage plans for the phones are like last year with the baseline models getting 128GB. There are also 256G, 512GB, and 1TB options. Prices for the new iPhones have gone up considerably for buyers outside the US compared to last year's iPhone 13 models. Our table has the base price for each model of iPhone and Apple Watch class. Let’s examine.

As for the Apple Watch models – the Watch SE and Watch Series 8 ship from September 16 in the first wave of countries while the Watch Ultra is joining the party on September 23.

AirPods Pro 2 can be reserved from September 9 with open sales also going live on September 23.

Buyers can choose from a variety of new Apple Watch models

In Brazil, you can literally buy a car using that iPhone 14 Pro Max cash 🤑