The Honor 50 series will be announced tomorrow, June 16, but we already have a decent idea of what to expect. While the leaks have been pretty detailed it's always nice to see some confirmation, which in this case comes in the shape of a couple of benchmark scorecards.

Both the Honor 50 and Honor 50 SE have popped up in the Geekbench database, complete with their chipset details.

The Honor 50 SE with model number JLH-AN00 will come with a Mediatek MT6877 chipset, which is the Dimensity 900. The vanilla Honor 50 will be slightly more powerful, packing a Snapdragon 778G. 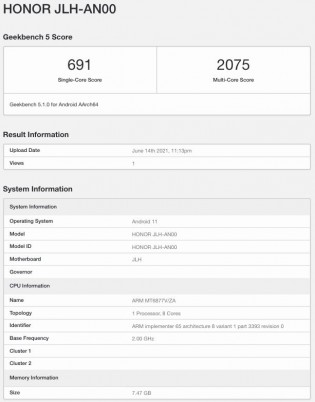 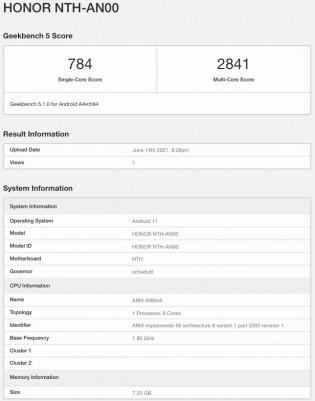 We can also see both devices are listed with Android 11, which is hardly a surprise. The launch is scheduled to take place in China, so naturally, Honor won’t mention Google Services, but we will ask company execs for further statements on the eventual global launch and what kind of software we’ll have.

Even more important thing would be storage, looks like Honor is using UFS 2.X storage, i hope future 778G phones would come with UFS 3.1.

Not really, i've seen some CPU throttling tests where it reduces it's performance to about 80%, i know it also depends on CPU cooling and thermal threshold, if 778G can sustain better performance than that, i'd prefer 778G. But 870 ha...

Is the SD 870 having problem with performance stability on the CPU side?