The Honor 5A, which was made official by Huawei earlier this week, received more than 11 million registrations for its first flash sale. This was revealed by the Chinese company yesterday. 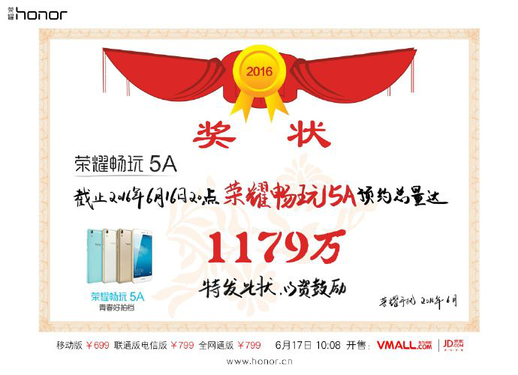 The number - undoubtedly - is impressive, but one should keep in mind that it doesn't mean that those many people pre-ordered the phone - it's just the number of registrations for the sale.

The device - which carries a price tag of RMB 699 (around $105) - was scheduled to go on sale in China yesterday. So, we expect the company to reveal the actual sales numbers anytime now. As for the phone's availability outside of China, there's currently no information on if and when this will happen.

If copy, they will be claimed back money for copy.

wow! i felt very surprised to see that number of registration of 11 million for honor 5a. at first i said it's a lie but when i saw the price tag i said oh then its really possible. price tag of $105 i will even get one for my little boy when it beco...