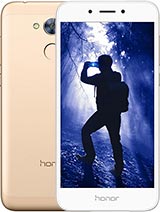 This is my first phone in my smartphone history. I bought it around 2018 lol because I wanted a budget smartphone! It's performance was well during 2018 but now, I don't think it will work well and luckily I changed this to A21s which is my current budget smartphone. I almost forgot how is the performance while playing pubg mobile lol. But the only thing I can remember is it can put to 20 fps which is medium. It will be better if it has GFX, but I do not know it's existance back then😂. This phone overheats easily due to Lithium Ion battery (Li-Ion). But it works well for working and others except gaming. It was a funny moment when I was using this phone back then. I used power saving mode to play PUBG Mobile on it😂. I don't even know what's inside it🤣. *Sigh*, what a funny and memorable memories~

How can I install google core gms package in honor 6a

My honor dli-l42 memory say 32GB but when i plug it on my laptop it say i have only 16GB, what could be the problem?

Bitoy, 08 Jun 2018Can this phone run Rules of Survival without lags in balanc... moreI don't play rules of survival, but in this price, phones can only play games like PUBG on low graphics.

It can play PUBG without lag if you use PGT Pro gfx tool. Kirin 659 is a good chipset in this price.

But for best gaming experience in low price, go for phones like Realme C3, Realme 3... Basically, phones with more powerful chipsets than Snapdragon 636.

Arnab M, 20 Dec 2018Its a good phone, however I think the battery could be improvedActually for the price / quality the battery is above the media ,

Its a good phone, however I think the battery could be improved

Its a good device just lags a bit

Honor is discriminating On region basis

Can this phone run Rules of Survival without lags in balance settings?

rageF, 29 May 2017What is on screen touch?On screen means the navigation buttons are on the bottom of the display instead of where the logo is.

Pro: Cheap and cheerful phone, works great as a work phone.
Con: The camera and video quality is terrible at low light condition; very grainy as if taken at ISO 400.

I got it from a box of Huawei Honor 5cpro !!but why was it in there?

Very good phone and reasonable price ...
I need to know please , is this phone will be upgraded to android 8 or not ?

Got it from sale 109 euros. Very good value for the money.

Anonymous, 02 Aug 2017€169 for 2GB/16GB EU versionWas on sale for 139 euros, so I bought one 6A for my mom as a Christmas present. The local model apparently doesn't have the fingerprint reader (couldn't see if the test unit in store had, but the specifications didn't list the reader at all). Surprisingly fast for a cheap Android-phone.

does it support volte?