Honor 7A becomes official on April 2 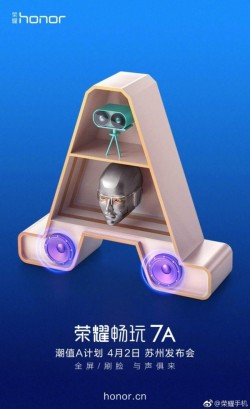 The upcoming Honor 7A leaked yesterday with its tall screen and dual rear cameras, but its expected unveiling this Friday isn't going to pan out.

That's because Huawei's online-first sub-brand has just sent out invites for the phone's official introduction, which will instead happen on April 2 - that's next Monday.

The invite confirms the main dual camera setup, and it also hints at dual speakers and support for Face Unlock. The phone pictured in yesterday's leak was surprisingly devoid of any fingerprint scanning solution, so you're probably going to put the face identifying biometric authentication to good use.

The Honor 7A should be powered by the Snapdragon 430 chipset, just like the Y7 Prime 2018 that was announced today. Its screen resolution is identical too at 1,440x720, but the 7A's panel is smaller at 5.7". The two share the RAM and storage configuration as well: you get 3GB of the former and 32GB of the latter.

The similarities continue with what seems to be an identical dual camera setup on the back, boasting 13 MP + 2 MP resolution, the 8 MP selfie snapper, and finally the battery capacity is the same too: 3,000 mAh. The Honor 7A will run Android 8.0 with EMUI 8.0 - yes, just like the Y7 Prime 2018.

wow they spit out about 29 phones per year.

They try to make better phone under 200. my previous phone does not come whit protection at all in software and water. in android 5. i wheely angry abaut that waisted money.