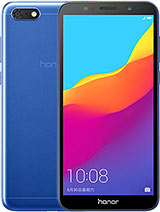 Only people with hearing aids have this phone

Had this phone for nearly 3 years now, its a bit choppy and sometimes it'll restart itself every now and then but I'm pleasantly surprised to see that its still in full working order. Only noticed about 2 weeks ago that the battery is starting to go and that's why I'm getting a new phone, but for £80 this thing is definitely worth it if you're looking for something that just... Does its job as a phone. Nothing snazzy, just a phone. (the cameras are shit tho)

Chris , 12 Jul 2021Can u play codm in this phone does it work smoothlyLol it doesn't runs free fire smoothly and you are talking about codm

Anonymous, 04 May 2021Honestly, this phone is decent. Unless if you're expec... moreCan u play codm in this phone does it work smoothly

FARHAN, 04 May 2021My mobile honor 7s ram 2gb and memory 16gb my mobile slow r... moreDid you updated your phone recently? If you did then I’m afraid your phone is now crap unless you do a factory reset. Try it and see what happens let me know how you got along with it ok 👍!

FARHAN, 04 May 2021My mobile honor 7s ram 2gb and memory 16gb my mobile slow r... moreIf your phone is running slow the office solution is to buy a new one new software

Honestly, this phone is decent. Unless if you're expecting it to run COD or PUBG at 60FPS (Though, you could probably run PUBG lite at a solid 30FPS)... you'll be fine if you use it for messages, taking pictures, or social media. The audio is a little weird. after all, it's 100$ phone. However, if you're looking for a great affordable phone, you should consider buying RealMe 7.

Too slow for a 2gb ram phone

DO NOT BUY THIS PHONE!!!! All jokes a side, its the worst phone i ewer had, its slow and lagy, for 90€ im better of buying a pile of bricks.

debsss, 20 Oct 2020Had this phone a few weeks. Bought it because I dropped my... moreThe iPhone 8 is a flagship device and when it came out, it had the fastest chip in a smartphone. It is obvious that a phone for $100 / £100 will not be as fast. It is aimed at customers who only want a modern device for calls and texts. If you want a fast phone, buy the iPhone SE or a used iPhone 8 instead of a budget phone which will be slow because it is not ment to be used heavilly. The max budget devices can take is internet browsing, videos and checking emails. You can not buy a $100 smartphone and expect it to play COD or PUBG perfectly.

reviewer, 08 Nov 2020this phone is absolute trash and you would probably be bett... moreKeep in mind that it is a budget smartphone and is aimed at people who only want a modern device for calls and texts. If you sped more, you will get more- that is how the world works.

I bought the Honor 8s with the same 2gb, but with 32gb storage. Way better, what this phone needs is more ram (3gb or 4gb would've made this phone's performance better) along with 32gb rom since its a budget.

I've had the Honor 7S for 2 years now and for the price it is an excellent phone.
Pros: Large screen, dual Sim, decent cameras, battery life OK, Facial recognition (but a little slow in low light).
Cons: Only 16GB of internal storage, if you use more than about 50 apps you might want to upgrade to 32GB or larger. Can be a little slow from time to time but usually when I've left a lot of apps running but it's not much of a problem.

Had this phone a few weeks. Bought it because I dropped my iphone 8 and it smashed so needed a cheap phone quick... Never ever have I had a phone so slow, it crashes is so slow and my patience is wearing thin.... its too much hard work using it!
I bought a memory card and it still isnt great. still lagging.
I also am now having problems connecting my home wifi to it- so using my data all the time.
Definately not worth the money!!

i use this phone after 1 year i feel so lagging even im not a very hardcore user .conclusion dont buy this phone at 2020 better pick realme c12