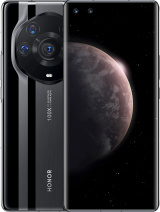 It's commonly known as Magic3 Pro+, But it's real name is Magic 3 Ultimate Edition

do you notice that the periscope 3.5 not work at mode photo just work in night mood only

Florent, 14 Feb 2022I don't get why we are punished like this. This is... moreSeriously? To me it's the ugliest back of the phone I've ever seen

You can buy 2x Realme GT for this price and get more cameras :D

notafanboy, 12 Feb 2022It's not coming. Fingers crossed that the next Magic p... moreI don't get why we are punished like this.

This is one of the best looking phone I have seen in years. What a shame not to launch it....

Marco, 10 Feb 2022Any updates regarding the global google play version?It's not coming. Fingers crossed that the next Magic phones will be released globally.

Any updates regarding the global google play version?

the hardware has so much potential. if they used huawei's photo processing, i would adore this phone

is the under display fingerprint the new one ? the huge one

Luckycorn, 09 Jan 2022If i had to guess i think they will be sold globally, maybe... moreI don't think there is going to be any global version of this device. It will be sold only for the Asian market.

I'm waiting for the Xiaomi 12 Ultra that I think with its Leica optics will be a much better phone than this one.

HuaweiFan82, 08 Jan 2022Where is selling the global version? If i had to guess i think they will be sold globally, maybe maybe not but the version does exist and is available in my country. Technick has also made a video where he taalks about a global version with google play services.

Luckycorn, 08 Jan 2022It depends which version of the phone you buy, the chinese... moreWhere is selling the global version?

According to dxomark this is the best phone in audio performance.

Ruben, 25 Dec 2021Was there a global launch? I want a Google version of this ... moreLuckily there is a global version with google services

global version?why this phone isn't good
And selfy camera is not good because ultrawide and 1080&30 fps